“Shark attack” is a stupid sub genre. If you’re not Jaws (1), you can get lost as far as I’m concerned, and that includes piranhas too. Deep Blue Sea takes the shark attack concept and moves it to an underwater research station, so it’s basically Jaws meets The Abyss meets about 3000 gallons of awful. 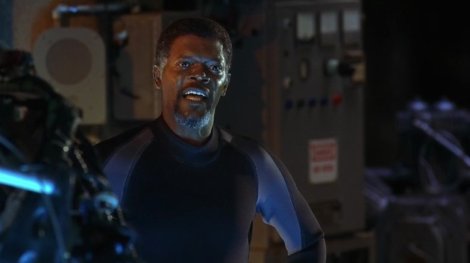 The tagline for this film is “Bigger. Smarter. Faster. Meaner.” which is ironic not because it sounds like it was written by Daft Punk, but because there’s nothing smart about this film at all. One of the most noticeably awful things is the dialogue, some quotes of which I will unfairly take out of context for you now:

“You wait your whole life for one moment, then one day it’s tomorrow.”

“Sharks are the oldest creatures on the planet, from a time when it was just flesh…and teeth.”

“Sharks do not swim backwards. They can’t.”

The quality of the dialogue is not aided at all by the people saying it. Jackson gives the least committed performance of his career, and even his wardrobe seems to be phoning it in. Then there’s a surprising appearance from Stellan Skarsgard. But once these two well-known faces are killed off things go bad to worse as the film comes to rest on the shoulders of a guy who looks like a straight-to-video action movie incarnate, and his generically awful scientist love interest.

It’s incredible that this stuff is the product of three writers. How about some more quotes?

“You think water’s fast? You should see ice. It moves like it has a mind of its own; like it killed the world once and got a taste for murder.”

“She screwed with the sharks. Now the sharks are screwing with us.” –Obviously not hammerheads then (ba-doom cha!)

LL Cool J– “Einstein’s theory of relativity: grab hold of a hot pan, a second seems like an hour. Put your hand on a hot woman an hour can seem like a second. It’s all relative.” Other bloke (seriously)– “I spend four years at Cal Tech and that’s the best physics explanation I’ve ever heard.” –Maybe he did a philosophy degree. 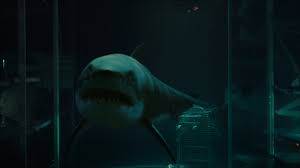 It’s yet another film where the characters are inexplicably stupid. Yet its stupidity could be forgiven if it delivered the Samuel L. Jackson vs sharks mayhem it seems to promise. But Sharks on a Plane this is not. It features some of the most poorly rendered and ill-used CGI ever put to film. James Cameron waited ten years for the technology to make Avatar. It looks like Deep Blue Sea‘s makers couldn’t even be bothered to download updates for Windows. Step one of making a shark attack film should really be “can we make the sharks look decent?” If the answer is no, you might want to get a bigger budget, better animators, or burn your script before anyone sees it and your career is over.

It’s the kind of film that makes you wonder what the atmosphere was like on set. Did they know they were making a bad film? How did they muster the enthusiasm to learn their lines? Did the director tell them the sharks were going to look good when it was finished? If you’ve already seen it or never plan to see it watch this scene, which sums up everything I’ve said.

Deep Blue Sea? Do Not See.