A gnarly old boxing instructor (Clint Eastwood) is approached by an enthusiastic new fighter who’s prepared to do what it takes to make it to the top. There’s only one problem: she’s a lady! 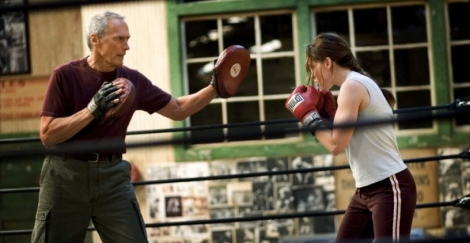 Million Dollar Baby begins like many of its rivals, with the trope of the enthusiastic youngster (Hillary Swank) trying to get the old guy to train them, that’s been used in every other Rocky/Creed movie. It then goes through many familiar competition movie moments, but in an altogether more subdued way. The inevitable training montage doesn’t feature triumphant Rocky music but slow, country-style guitar, giving it a more restrained tone. 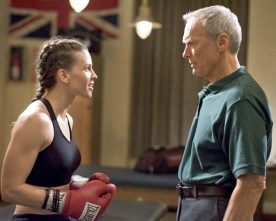 But just when I was getting frustrated by the inevitability of it all, it takes a number of twists and turns which set it out from other films set in the ring, and even brings up surprising moral questions. Going into the film I knew nothing about it other than it has Hillary Swank boxing (I kept wondering when the baby would show up) and its surprising final act really sets it apart.

It’s bolstered by excellent performances from Swank, Eastwood (who also directs) and Morgan Freeman (who also narrates). Why has boxing had so many more successful films made out of it than other sports? It could be because it’s more personal than team sports. But its violent nature also allows for additional suspense and excitement, and when the main character’s physical health is on the line it automatically raises the stakes.

But while there have been many films built around the sport, Million Dollar Baby still packs a punch. And as it turns out the fact the boxer is female is the least interesting thing about it.