Three years ago, Brad Pitt vowed to stop acting at the age of 50. Now that he’s reached that age but nonetheless stars in David Ayer’s Fury, a World War II movie about a US tank crew fighting through Nazi Germany, one can’t help but wish that he had actually quit.

Of course, a grizzled Pitt looks great atop a beat-up Sherman tank, even if he’s doing exactly as he was in Inglourious Basterds. But a man of his intelligence and liberalism should know better than to star in and executive produce such an obvious piece of pro-war propaganda. The tank’s crew are a bunch of sadists, gleefully crushing anything in the tank’s path like they’re at an Arnold Schwarzenegger charity event. Speaking of Arnie, he starred in Ayer’s previous film Sabotage, which was a similarly violent affair featuring similarly hyper-masculine meatheads being similarly unpleasant with guns. But while Sabotage was a throwaway exploitation film, Fury purports to be a serious study of a historical event, and that’s what makes it so irresponsible.

Fury pulls out every trick in the book, a book written by Steven Spielberg, to inject emotional drama into the bloodshed. But each nonsensical Bible quote and rousing music cue feels clunkier than the tank itself. We can hear the gears straining in Ayer’s mind, desperately trying to convince us that he’s making an interesting point about war, as opposed to an excuse for some good old-fashioned Nazi killin’. But his attempts prove to be in vain, no more so than one embarrassingly ugly scene in which Logan Lerman‘s character stops off to have sex with a presumably terrified German girl, after impressing her with his piano playing and palm reading. “This line here means you’re going to be in an awful war movie.” 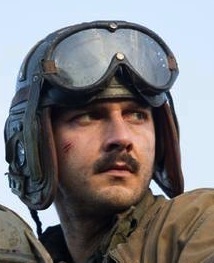 Quite why a woman in Nazi Germany would be dressed like the girls of today, or why sex would be her priority in this life-or-death situation, or why his character would be taken from the secretarial pool and dumped in the front seat of a tank, all remain entirely unclear. But somehow, he goes from shit-scared typist with no combat experience to Nazi-hating killing machine faster than you can say “I thought Shia LaBeouf wasn’t famous anymore.”

Horrifically uncomfortable jingoism aside, Fury doesn’t even have a proper plot. It simply trundles from fight scene to fight scene, shooting unarmed, surrendered men along the way with a joke and a smile. And we’re expected to like these people. Just because war is senseless, that doesn’t mean war films should be. On the contrary, the best war films are imbued with a sense of humanity that’s totally absent from this lumbering propaganda machine for people who thought Saving Private Ryan was too woolly. By posturing as a meaningful movie while fetishising the machinery of war, Fury is insensitive, irresponsible and idiotic. It’s a film with brains strewn all over place, on the ground, on the tank, on the seats… everywhere but in its head.