If you were stranded on a deserted planet, what would be your first move? Find food? Secure oxygen? Build yourself a robot friend? 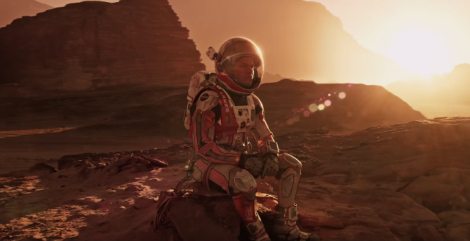 Matt Damon plays such a person, astronaut Mark Watney – an authentic astronaut name if ever I’ve heard one. Presumed dead by his crew, Watney is left behind on Mars, where he must survive using only his wits and gaffer tape.

While most survival movies are populated by incompetents, The Martian is elevated by its resourceful main character; after all, they don’t send hapless idiots into space. Not since all that trouble with Sandra Bullock.

With its highly competent protagonist, this is All Is Lost In Space, albeit without the existential depth. There’s never a particularly profound sense of isolation, but that’s not really the point here – if that’s what you’re after, see Duncan Jones’ Moon.

Ridley Scott’s movie is much more a tribute to space exploration in general; an uplifting affair with a great sense of humour. It’s written by Drew Goddard, who subverted the tropes of the horror genre alongside Joss Whedon in The Cabin in the Woods, and adapts Andy Weir’s novel with a similar playfulness and pop-literacy. 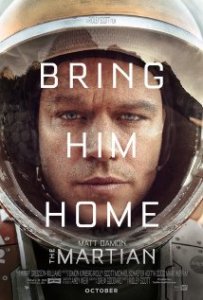 I thought we agreed to stop doing the writing-over-faces poster?

This leads to some annoying dialogue (lines like “I’m going to have to science the shit out of this” can’t help but make you cringe), as well as some odd moments, including a reference to The Fellowship of the Ring while Sean Bean sits unable to pass comment. Yes, he sounds Yorkshire; no, he doesn’t die.

He’s actually one of many superfluous characters, and the film suffers from overcrowding – ironic for a film ostensibly about one man isolated on Mars. This isn’t helped by most of the women being given the same haircut, or Kate Mara repeatedly being cast as unconvincing scientists.

The rest of the cast bring a wealth of experience in space acting; Jessica Chastain and Matt Damon were both in Interstellar, but it’s Benedict Wong who emerges with the strongest space credentials, having appeared in Sunshine, Moon and Prometheus – and now The Martian. If that doesn’t qualify him for some real-life space missions, I don’t know what will.

But the film succeeds on the strength of Matt Damon’s stellar performance; he’s likeable, funny and convincing – certainly more convincing than some of the movie’s space science, which starts to feel stretched like tarpaulin.

There’s the obligatory explanation of astrophysics using everyday objects (in this case, Donald Glover holding a stapler), a redundant use of 3D, and a rubbish epilogue – is there any other kind? But the movie still soars, thanks largely to its retro pop soundtrack, à la Guardians of the Galaxy; there’s disco, ABBA and a wonderful use of Starman by David Bowie AKA Duncan Jones Sr.

Plus, this being a Ridley Scott film, it looks great. While it fails to capture outer space with the visual majesty of Interstellar, the pristine renderings of Mars are impressive indeed, with vast red horizons and towering desert dunes. This is probably the 77-year-old’s best film since Thelma & Louise – calm down everyone, I said probably.

In essence, The Martian feels like Silent Running as told by Aaron Sorkin; it’s smart, funny and ultimately celebratory – the central idea is that science, and sci-fi, are fun. And that Matt Damon should not be sent on any more missions; between this and Saving Private Ryan, the guy’s clearly a liability.

3 responses to “The Martian”