The Expendables series has an ability to create rumours like no other, due to the fact the appeal of the films is almost entirely in their casting. Today we were treated to the news that Nicolas Cage, long rumoured to be in the film, won’t be.

“Fine,” we all thought, “if you lose one badass from The Expendables two others up in his place. Just look what happened when Bruce Willis dropped out to be replaced by Harrison Ford.” For a while you might have even been excited at who might replace Nick. Clint Eastwood? John Travola (in a kind of real life Face/Off switcheroo)? Maybe Vin Diesel or Vinnie Jones?

Then you heard it was Kelsey Grammer.

What, the guy from Frasier? 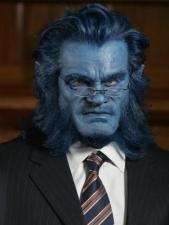 What else has he been in? I guess he was kinda tough in X Men: The Last Stand, but he still played a politician. He was Sideshow Bob in The Simpsons, but Bob’s never even killed anyone, and if we’re going on voice work at least get the guy who plays McBain. Expendables is supposed to be an outlet for ageing tough guys. Kelsey Grammer is just ageing. The simple fact is that there are about 200 actors they should have asked to be in the film before Grammer. [Check out some of my suggestions]

Maybe they did. Maybe they asked all the vaguely tough actors in Hollywood, from John Wayne to Hayden Christensen; Harvey Keitel to Jaden Smith. But if that happened, and they all declined, they should have just got rid of the part. These films aren’t exactly known for their plots. They’re an excuse for action star cameos. If you can’t get action stars, don’t bother.

“Jesus walked on water. I swim through land.”

Are they suggesting that if they hadn’t got Chuck Norris in part 2 they might have hired Philip Seymour Hoffman or Colin Firth to walk on and say, “I was bitten by a cobra, but after five days of agonising pain, the cobra died.”? Because that wouldn’t make any sense. Maybe they’ll write in references to Grammer’s work. “This is Frasier Crane, I’m listening….to your screams of pain!” I can’t quite see it myself.

I know that in this world where Ben Affleck can be Batman anything can happen, but this? If we’re letting anyone be in an Expendables movie they could go on forever. Expendables 7 with Nick Frost, Barbara Streisand, Patrick Stewart, Frank Oz, Nicole Kidman, Matt Le Blanc and the shit baby that played Danny DeVito in the opening of Twins. Why not? If Kelsey Grammer can be in The Expendables why can’t Paul McCartney join Steps and Noel Edmunds become Secretary General of the UN? Since we’re allowing anything to happen.