Flint Lockwood (Bill Hader) and his friends are back for seconds in this family food-based caper. The island of Swallow Falls, left full of food at the end of the last film, is being cleaned up by none other than Flint’s idol, inventor Chester V (Will Forte). But on the island the “FLDSMDFR” machine from the first film is still working, and instead of raining food, it’s churning out animals made from foods that sound a bit like their name. 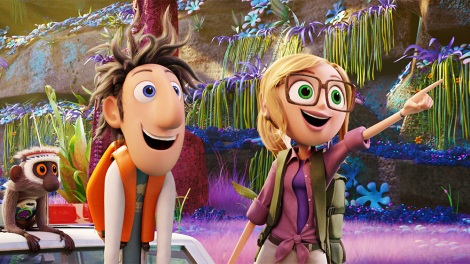 The comedy here is incredibly course, as we’re served with helping after helping of delicious food puns. If someone exclaiming “there’s a leek in my boat!” when a leek animal is sat next to them tickles you, you’ll love this film. There’s an impressive array of creatures here, even if some of them are very confusing. The shrimpanzee, for example, could be a chimp made from shrimp or a shrimp made from chimp, depending on where in the world you’re watching. 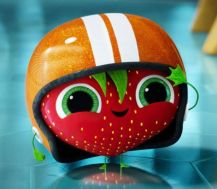 There’s far more story here than in the original. Meatballs 1 was basically Flint saving the town from his own invention, but this time round we have a scheming villain with a plot that must be foiled, even though precisely what’s going on is sometimes hard to fathom among the bright colours and dreadful puns.

Flint makes for as likeable-a hero as the first film, with his band of misfit friends providing plenty of laughs. There are some welcome additions too, like a talking orang-utan called Barb (Kristen Schaal) and Chester V, the Steve Jobs-inspired supercool inventor with curly, wavy arms which you can tell were great fun to animate. 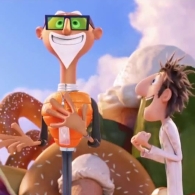 Strange is the decision of Mr T not to return to the role of Earl, who is essentially his computer animated self. Terry Crewes does a fine job as his replacement though, so the change is hardly noticeable. It also keeps the same gag-a-minute approach with self referential jokes for the adults and clever asides which are so frequent they’re easy to miss. There’s even a Wilhelm Scream or two thrown in there for us film buffs.

This has to be one of the weirdest animated films of the year. And that includes a film where a snail races formula 1. On a par with the original, Cloudy With a Chance of Meatballs 2 has plenty of cheesy gags to get your teeth into. It’s yet to go stale and pass its sell by date, even if it may leave you too full for a third course.