Andrew Garfield steps into the famous spandex suit for a second time. Two years on and he’s still dating Gwen (Emma Stone), haunted by her dead father (not literally) whose dying ish was for him to keep away from Gwen. With Gwen vying for a place at Oxford, that may become easier than he thinks, but there’s more on Peter’s mind as Electro (Jamie Foxx) terrorises New York, his friendship with heir-to-billions Harry Osborne deteriorates, and his long-dead father finds increasingly contrived ways of communicating expository dialog 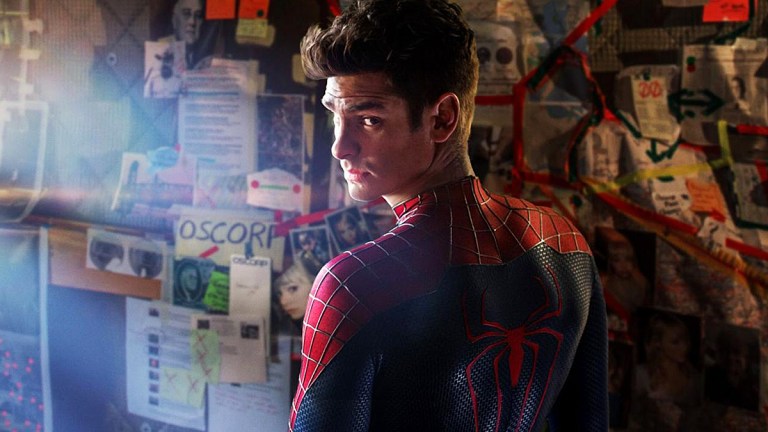 I was surprised this film had an original plot. I was expecting another version of the origins story, as director Marc Webb seems to think the general public aren’t capable of remembering it for more than about a year. The action kicks off right away with Spidey taking on a high speed car chase on the way to his graduation. Gone is Toby McGuire’s impossibly boring, dough-faced dweeb, replaced by a Peter Parker who actually seems to enjoy being Spider-Man, and isn’t on the verge of tears the whole time. Gwen Stacey (Emme Stone) continues the tradition of superhero girlfriends being rather dull, but at least they’re increasingly given something to do that isn’t just playing the damsel in distress. Thor’s Jane is a physicist, Pepper Potts basically runs Stark Industries, and Gwen is a scientist at Oscorp who plays a crucial part in saving the day.

Jamie Foxx is great as Electro, a Carrie-esque victim of a villain, with powers and appearance that are basically Dr Manhattan from The Watchmen, even if the character’s backstory and motivations are laughable. While The Lizard in the first film was a bit of a let-down, Electro looks great and is a very cool character to watch. Also, Peter has upgraded from Bing to Google, so this film is far more believable.

Chris Cooper briefly features as Norman Osborn, played by Willem Defoe in 2002, meaning the character has now been played by Hollywood’s two most evil looking actors. If they re-boot it again in a few years the only one they’ll have left is Hugo Weaving. But it’s Osborn Jr, Harry, who takes the bigger role, with Dane DeHaan giving a great performance.

The pacing is rather strange with, however. The final 20 minutes feelslike the beginning of the next film, rather than a continuation of this one. We can only hope the sequel benefits from having its villains lined up in advance. Altogether Webb continues to right Sam Raimi’s wrongs and make the world a better place. Like the first movie it seems a stretch to call it amazing, but it’s certainly acceptable.