Eye in the Sky is a military thriller about an operation to capture Al-Shabaab extremists in Kenya; not to be confused with Iron Sky, which is about Nazis on the Moon. 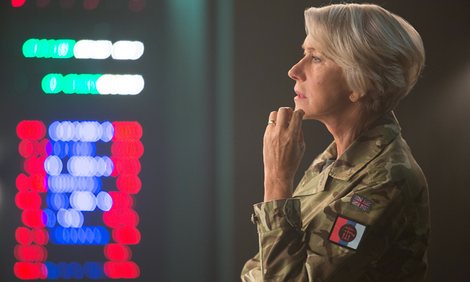 The movie unfolds like an ethical thought experiment, remaining both confrontational and suspenseful throughout. This is a film about the cost of war; a film of great balance and intensity. With time running out, characters debate and deliberate over the morality of their actions in warfare. It’s a format reminiscent of the similarly strong Danish film A Hijacking, with a comparable combination of tension and reflection.

Helen Mirren convincingly plays a colonel approximately 15 years her junior, alongside Breaking Bad‘s Aaron Paul, Captain Phillips‘ Barkhad Abdi and the late, great Alan Rickman in his penultimate picture, injecting wry humour into the film’s opening as only he could. The four of them never met during filming, and the movie excels by addressing the moral dilemma from several different viewpoints.

Timely and political, Eye in the Sky is an ethical minefield, poised to detonate at any moment. Gavin Hood’s direction is tense and Guy Hibbert’s screenplay offers no easy answers. It distils highly complex and impossibly tough moral questions into a tightly focused cerebral thriller. Not since Bosnian movie No Man’s Land has warfare been so sensitively handled by cinema. If only more war films were this thoughtful, we’d be like those Iron Sky Nazis: over the moon.

3 responses to “Eye in the Sky”