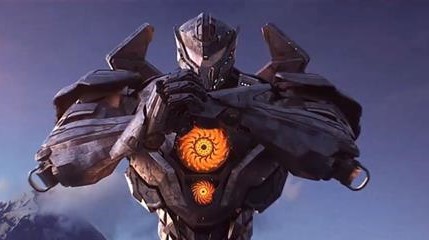 The sequel to Guillermo del Toro’s 2013 robots vs. monsters movie is directed by first-timer Steven S. DeKnight, a filmmaker so disappointing that even his name is trying to debase him. This time we follow the son of Idris Elba’s character from the original, played by John Boyega; a fine actor, but not when he’s lumbered with lines like: “I can’t believe she just hologrammed me.” Who wrote this?? Actually it was 4 people, which is insane. It took 4 entire people to come up with this exchange: “What did you just do?” “What I’ve been planning the last 2 years… I’m ending the world.” I know the first film was pulp but this is closer to Oasis.

Anyway, Jake Pentecost and Amara Namani (Boyega and Cailee Spaeny) are apprehended by a military Jaeger (whom I swear I heard say: “Seriously, stop!”) for stealing Jaeger parts. Instead of going to prison they’re sent to join the military (what?) under the command of Nate Lambert (Scott Eastwood. There are lots of sons in this film; not so many stars). By unfortunate coincidence, the Kaiju then return to wreak havoc on the Earth, and it’s up to our plucky heroes to destroy them. Or Charlie Day and Burn Gorman to annoy them back to their home planet using their barely-funny-the-first-time schtick.

Come back Clint, all is forgiven.

As I said, the original was hokey, but clearly made with del Toro’s Jaeger-sized passion for monster movies and Japanese cinema. There’s nothing personal in Uprising, unless deKnight has a particular affection for Rock ‘Em Sock ‘Em Robots. The machines just stand there taking it in turns to punch each other, resembling a cartoon that’s been directed by a robot. The characters are no better, trading clichés in the middle of a nonsense plot that no amount of Jäger could make fun. One of these stock characters (Ivanna Sakhno) keeps saying: “Bigger is better.” Pacific Rim: Uprising is neither. Try “dumber is dumber.”

Pacific Rim: Unsurprising is more like it, crushing every spark of creativity beneath its lumbering robot foot. Lacking the awe and scale of the original and any trace of emotional involvement, this sequel fails to engage on every level. DeKnight has said the movie (like all movies now) is a springboard for a cinematic universe (these films Jaeger-bomb at the US box office but do brilliantly in China, hence a significant Chinese presence in this picture) but the damage is already done. Seriously. Stop.