That’s RSC as in Royal Shakespeare Company as opposed to Royal Society of Chemistry, although David Threlfall and Rufus Hound have plenty of that too. 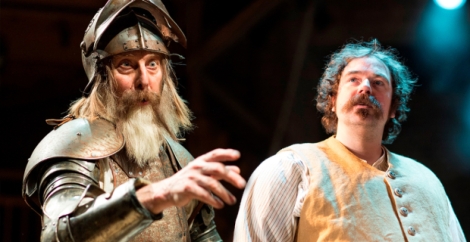 Now playing at London’s Garrick Theatre until 2nd February, Don Quixote brings the spirit of Monty Python and the Holy Grail to Miguel de Cervantes’ novel, anchored by Threlfall’s masterful lead performance as Spain’s 17th-century answer to Frank Gallagher from Shameless. Sure, the “knight” is brave and chivalrous, which can’t really be said for Frank – a man who shacks up with an agoraphobic so she won’t bother him down the pub – but they both have ideas above their station, a penchant for flowery language, and a view of how the world should work that’s never in step with reality.

Don Quixote’s (which sounds like a donkey-themed breakfast cereal) befuddled adventures in chivalry are brought charmingly to life with a combination of animal puppetry and knowing comedy; it could be called War Horse & Hound. The comedian makes a likeable Sancho Panza and immediately establishes the show’s fun, interactive elements, making the production as funny as it is touching. Full of great songs, costumes and imagination, Don Quixote is a joyous ode to a time when to be a knight was about more than how much money you’ve given the Tory party.