This is the story of the relationship between Mary I of Scotland (Saoirse Ronan) and Elizabeth I of England (Margot Robbie), and the fight for succession in the dying days of the House of Tudor.

Mary Queen of Scots is unfortunate to follow hot on the heels of The Favourite, the anti-costume drama which proved the genre can have real bite with cutting dialogue and sharp wit. Mary takes a far more traditional approach opting for a stuffier, more formal tone that feels altogether more familiar.

It follows the school of thought that says historical dramas should be no fun whatsoever, with laughs about as common as a tan in the austere castles where our characters live beneath the endlessly grey British sky.

But it is of undeniably great quality. It starts slowly, but there are plenty of engrossing scenes, thanks largely to superb performances, especially from Ronan and Robbie. Other well-known faces include unrecognisable Guy Pearce and David Tennant.

Mary and Elizabeth were very much the Alyssa Edwards and Coco Montrese of their day; a pair of queens endlessly feuding over a crown. Perhaps they should have decided it in a lipsync instead of via the fraught means of palace intrigue.

And like Rupaul’s Drag Race, the hair and costumes are superb. This, added to the excellent cinematography, creates an aesthetic which looks like an oil painting. And it has a modernist Max Richter score which manages not to sound out-of-place in the 16th century.

All this results in an enjoyable and well-rounded drama which doesn’t feel particularly inventive, but does do what it seeks to do exceptionally well. 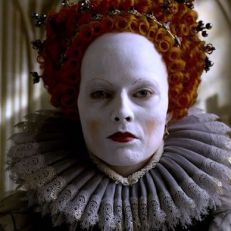 2 responses to “Mary Queen of Scots”