In 1972, at the height of her fame, Aretha Franklin decided to take it back to church by recording a Gospel album in an actual church, the New Temple Missionary Baptist Church in Los Angeles.

Like Diana Ross: Her Love, Life and Legacy, this is a concert movie filmed over two nights, but unlike that film it’s upfront about that fact. It’s also a far more intimate and personal affair, with her father Pastor C. L. Franklin in attendance, as well as Mick Jagger. 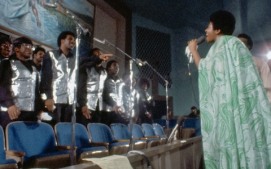 The perfectly clear and soulful voice that seems to flow so effortlessly from Franklin serves to demonstrate why she’s the greatest vocalist of contemporary mainstream music. While she sings from the pulpit, the voice comes from the heart, and in 1972 she already posses the aura which would surround her for the rest of her life. Yet the true marvel is that this dazzling display shows only a fraction of her extraordinary ability which includes disco, jazz and even opera.

“This is a church”, pastor-cum-pianist James Cleveland reminds the audience. But rather than a request to keep a respectful calm, he encourages participation, resulting in an electric, almost euphoric atmosphere, with singing along and dancing in the aisles. Praising your god through a frenzy of emotion and joy seems to make much more sense than via the depressing dirge of traditional white Christian music, and it’s certainly hard to imagine Aled Jones pulling off something similar.

Unfortunately we never get to hear Aretha speak, with the men doing all the talking and telling her story for her, which is a great shame. But her voice rings through, making this a captivating experience and a timely reminder of how greatly she will be missed.