They say that behind every great man is a great woman, but The Wife is about a great woman (Glenn Close) who’s stuck behind a mediocre man, namely Joe Castleman (Jonathan Pryce), a writer who is awarded the Nobel Prize for literature.

The story is told with a great deal of restraint. Instead of sensational melodrama it opts for a subtlety and gradual development which make it utterly believable. The relationship between the couple is well handled, with a believable chemistry throughout their ups and downs. 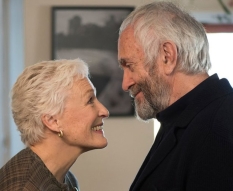 Close gives a brilliant, nuanced performance as the Alma Hitchcock of the literary world, but I found it easier to relate to the mediocre writer she’s married to. Christian Slater is also good, reprising his role as the investigative journalist from Interview with the Vampire.

It’s expertly directed by Björn Runge. Set mainly in Stockholm, it has some gorgeous cinematography and a beautiful minimalist soundtrack by Jocelyn Pook. Yet the story doesn’t feel entirely novel (this is even referenced with a wink at one point) and its unsatisfactory conclusion is disappointing in a film about literary brilliance. What results is something like Amour meets Big Eyes, falling between the two in terms of both content and quality.