Terminator: Dark Fate is set in a utopian future where Terminator 3, 4 and 5 never happened. This time it’s James Cameron who’s back, travelling to his cinematic past in order to save us from yet another Judgement Day scale catastrophe like 2015’s Terminator Genisys, taking producer and story credits. 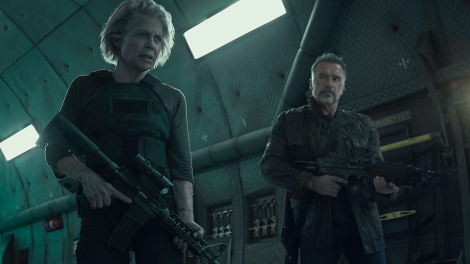 It’s a couple of decades since Sarah Connor (Linda Hamilton) and son John stopped Judgement Day, and Sarah spends her free time hunting down rogue terminators which are sent back in time with surprising frequency. So when the most advanced model yet (Gabriel Luna) comes back to kill Dani (Natalia Reyes) Sarah is on hand to kick some robot ass.

There are two main reasons it’s proven so difficult to make a good Terminator sequel (after the legendary T2). Firstly the franchise has always been bound to the concept of Judgement Day, which has had to be repeatedly postponed beyond its original 1997 date as real world years have advanced, making each film feel less consequential. The obvious thing to do is set a film after Judgement Day, but they tried that in Terminator Salvation and everyone hated it.

The other problem is over-reliance on Schwarzenegger for its vision of Arnegeddon. Again Salvation tried to move beyond this and failed. So he has to be there, and the writers have to explain why the killer robot now looks like a 70 year old man.

Dark Fate solves the second of these problems well, providing a satisfying continuation of both Sarah and the T-800’s stories from T2, as well as a largely plausible plot which convincingly explains the T-800’s aged appearance. It also downplays the T-800’s role and tries harder to create a story which is more than just a star vehicle, allowing us to imagine a future of Terminator films without him.

Its solution to the other problem is rather less graceful. We’re told that Sarah and John really did stop Skynet in 2 but years later a similar robot intelligence called Legion takes over and adopts the exact same time travelling termination tactics. This amounts to changing the name of the villain in the hope of fooling us into thinking we’re watching a new story when it’s actually just another T-hash.

But it’s undeniably the best Terminator film since 1991. It’s the first to get the tone right, shunning the goofy, cheapening comedy of 3 and 5 and the macho seriousness of 4, finding a balance which feels like a real Terminator film rather than a cybernetic imitation. It’s fast paced and loud with well handled action which pays homage to Cameron’s original films without ripping them off. It even brings in some more modern issues like surveillance and immigration in a sensible way.

Arnie nails his increasingly human take on the character, and the newcomers are good, particularly Mackenzie Davis as future super-soldier Grace. But its Hamilton who’s the true star, and the real heart of the franchise. If this was Terminator 3 it would be an inferior but enjoyable sequel, a managed decline. But the fact they’ve made us sit through three turds of various temperatures in the meantime means it’s too little too late to change this franchise’s fate. Let’s hope this is the final curtain call.