Greta Gerwig’s adaptation of Louisa May Alcott’s classic stars Saoirse Ronan as Jo, the writer; Florence Pugh as Amy, the artist; Eliza Scanlen as Beth, the pianist; and (presumably as some sort of cruel joke) Emma Watson as Meg, the actress.

The film is brilliantly cast with each March sister (none of them American) convincing as both “scary little” and slightly older, the timeline split between Little Women and Good Wives. This achronological narrative makes the drama feel pacier than the novel, without sacrificing any of its emotion or morality. Gerwig emphasises the feminism inherent in material written almost half a century before the word was used in the US, cleverly weaving Alcott’s own experiences in getting the book published with the text itself. 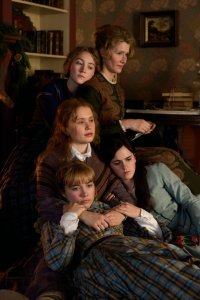 For Gerwig the personal is political, foregrounding the way Alcott has domestic moments take on profound meaning. She captures the author’s homely atmosphere and evergreen characters, their dialogue crackling like the March home’s fireplace. Ronan continues to prove she’s one of the best actors currently working, while Scanlen displays the unique mixture of sweetness and wisdom beyond her years she brought to Sharper Things (or Sharp Objects to use its real name) albeit without the sociopathy. Laura Dern, Timothée Chalamet and Meryl Streep round out the winning ensemble.

Gerwig updates Little Women‘s form but keeps intact its warnings against temper or vanity, and celebrations of family and independence. It’s a wise and benevolent picture about how quickly we grow up, but how certain lessons endure.