On the day of Britain’s exit from one European institution we went to see another, legendary German hit machine Boney M., credited with bringing steel drums to disco music. 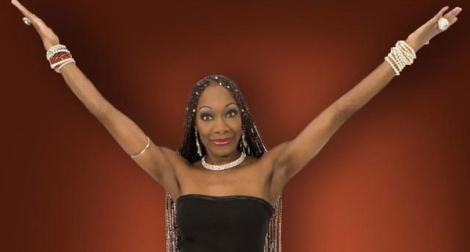 With longevity to rival Rasputin the band are now performing with only one original member, Maizie Williams, who made no vocal contribution to the studio recordings. She sounds great, however, and the new lineup stick to the winning formula of three female singers and one oblivious man dancing like a maniac, as they perform such hits as Sunny, Rivers of Babylon and Brown Girls in the Ring (sic). But Bobby Farrell’s raw sexual energy is replaced with Pontin’s Bluecoat realness in a formulation that’s only slightly less eerie than the Wailers fronted by a Bob Marley impersonator.

The gig was at Boisdale, Canary Wharf, a disco inferno of sweaty, drunk city wankers adjoined by a restaurant with swanky aspirations in which we were relieved to find the gig. But its besuited waiters spooning out condiments from little bowls were undermined by the sound engineer in a ‘this knob goes to 11’ t-shirt, and the fact they forgot us. On arrival they had no record of our tickets then, after conceding that trying to blag your way into a Boney M. concert is a strange way to usher in Brexit, agreed to give us a table, before forgetting us again in the waiting area.

The supporting DJ may have been Dom Joly, with the simple act of turning down one song while turning up another proving an apparently insurmountable challenge, resulting in gear-grinding leaps between disco clichés, and random breaks in songs as he munched on a sandwich.  But the audience were unperturbed, seemingly made up less of hardcore Boney M. fans (like me) than people who want a fun answer to the question ‘where were you when Brexit happened?’.

The fact the band are one unfortunate accident away from being a tribute act doesn’t stop them from hurtling their way through Frank Farian’s eclectic hits with suitable enthusiasm. As with Mamma Mia! the songs are so indestructible that the surrounding hardly matters, and the band have the chutzpah needed to pull off a Russian-themed disco banger, a ballad of a Chicago gunslinger and a tribute to the Troubles. Oh my Lord.