A deep-sea driller (Kristen Stewart) does some serious offshore boring in her latest box office bellyflop. 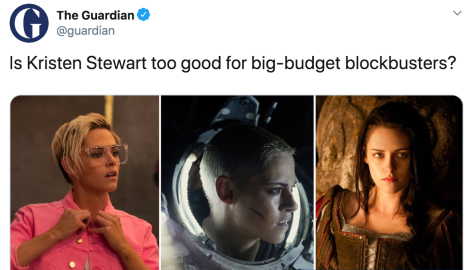 That’s not a thing.

Hot on the heels of the now long-forgotten Charlie’s Angels reboot, Stewart reaches new depths in this underwater Alien ripoff set seven miles below sea level. Undeterred by the science of water pressure or the pressure of audience expectation, the diving crew comes under aquatic alien attack in what can only be described as Resident Weevil.

If I’ve made that sound like fun that’s more than director William Eubank manages, in his attempts to mask the stultifying lack of anything using over-the-top strobing and more explosions than you’d expect in a film literally called Underwater. Meanwhile the choppy editing and murky visuals mean you can’t see shit, unless you count the acting.

The characters are indistinguishable (apart from Jessica Henwick’s marine biologist who has the memorable characteristic of being scared of going underwater) and the story nonexistent, making for a soppingly soporific flounderer whose imaginative dearth is matched only by its financial deficit.