Monsters, Inc. is one of Pixar’s finest creations. Funny, charming and imaginative, it’s one of those films you could watch again and again. It’s a shame, then, that this summer’s prequel fails to reach the same colourful heights. 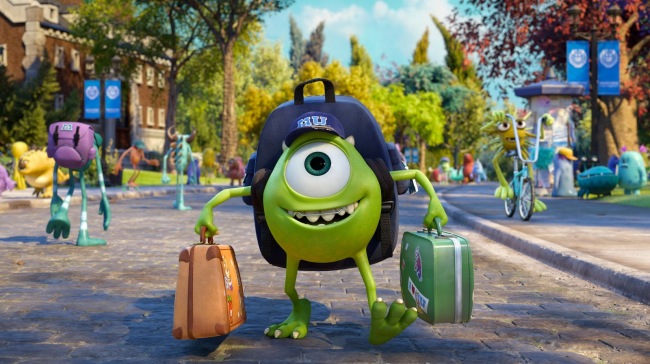 Mike and Sulley are back, not as best friends but as rivals on Monsters University’s prestigious Scaring Programme. Because of some plot happening, they are forced to work together to overcome the odds and win the Scare Games. This means that Monsters University plays out like a sports movie and all feels somewhat inconsequential, not least because of the usual prequel problems; we know exactly how it’s all going to pan out. Spoiler alert: They become best friends.

What Monsters, Inc. had that this lacks, apart from a lot of laughs, is a strong premise. The original told a story that allowed for a tonne of ideas, action and jeopardy. That’s all missing from the prequel, which doesn’t even have much of a plot.

Also absent are many of the characters from Monsters, Inc., replaced by some new ones who are quite cute but little else. It’s as if they’ve tried to make the franchise more kid friendly, forgetting that it already was. Steve Buscemi’s villainous Randy, pre-villainy, is criminally underused, and even the loveable Sulley (John Goodman) gets disappointingly little to do. The focus is firmly on Billy Crystal’s one-eyed Mike Wazowski (impossible to say in any other way than as Boo in the first film), who is really quite irritating without Sulley there as the straight man. Or straight monster.

It’s agreeable enough though, with a handful of good gags and some excellent music. Ultimately, Monsters University is just like human university – enjoyable, pointless and at the end of it you’re no closer to getting a job.

2 responses to “Monsters University: What’s That Coming Over The Hill, Is It A Disappointing Prequel?”