Recently I looked at films which have central characters accused of crimes they didn’t commit, which appeal to our fear of something similar happening to us, thus showing the importance of due process and evidence. But what about films which take a less black and white view? Or films which see the the rights of criminal suspects as a pesky inconvenience, when you should just be able to lock up the people who are obviously guilty? Here’s a look at films which find the notion of being innocent until proven guilty frustrating rather than liberating. 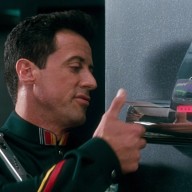 The most common examples of this are cop films, where a tough maverick wants to sling all the crooks in jail without the tedious evidence gathering. This happens in so many films that I can’t remember them all. In the opening of Demolition Man Sylvester Stallone’s John Spartan destroys an enormous building, committing an array of dangerous crimes to catch the bad guy, and is subsequently chewed out by his superiors. His attitude is pretty much “well, I caught the bastard didn’t I?” ignoring the fact a lot of people could have been killed.

Another great example is Red Heat. In this film Arnold Schwarzenegger plays a police officer from Russia who teams up with an LA cop to help out in a drug case. There’s a running joke that when people talk about Miranda Rights he thinks they’re referring to a person, and, in his ignorance, sets about torturing prisoners for information.

The attitude of this film is basically “look how much you could get done if you didn’t have to give criminals these stupid “rights”. Obviously a film about forensic evidence gathering would be of a different kind altogether, so while this attitude is often favoured by silly action films it doesn’t necessarily mean they have a political message.

Se7en is a film about forensic evidence gathering, and there’s far more detective work going on than in the aforementioned action films, but still a bit of police naughty business. To track down the elusive killer, who is dispensing victims according to the seven deadly sins, Detective Somerset (Morgan Freeman) gets access to the city’s library records,

which he’s not really allowed to do. He and detective Mills (Brad Pitt) then go to the house of a man who has taken out loads of books on the sins. Mills kicks the door down and goes in, in spite of not having a warrant.

When it luckily turns out to be the right person, they need to cover their tracks, so they pay a member of the public to lie about giving them a tip-off to the address. In situations like this the illegal activity is justified to the audience as the ends justifying the means. Sure, Mills kicks down the door of someone he has little evidence on without a warrant, then lies about it, but look! They catch the bad guy! If this was a false accusation film, the door would be kicked down and the resident extensively harassed before discovering they weren’t involved. It’s all very well to accept a cop breaking into someone’s home on flimsy grounds, but what if it happened to you?

A film which takes a more nuanced view is Christopher Nolan’s Insomnia, in which Al Pacino plays a big city cop called Will Dormer sent to investigate a murder in a remote village. During the case it emerges that in his past he once planted some evidence to imprison a paedophile of whose guilt he was certain, but who would not have otherwise been convicted. After his partner tells Dormer he plans to testify against him in an investigation into the paedophile case, Dormer accidentally shoots him in the fog. Because he knows no-one will believe he shot his partner by accident following the commitment to testify, Will alters the crime scene to save himself.

Here there is shown to be a persuasive case for fabricating evidence in some cases, but that it is ultimately wrong, and the truth has a habit of coming out. He has only altered evidence, prior to shooting his partner, once in his career, in order to implicate a known paedophile, which is understandable if not commendable. The second time is a result of the first, and only because, given the circumstances, he would have undoubtedly been jailed for something he did by accident. In this sense he’s actually altering the evidence to better lead people towards the truth. Or would be if he didn’t try and pin it on the murder suspect. Dormer is unable to sleep over the guilt. Because of the first piece of fabricated evidence he then has to keep lying to cover his tracks, suggesting this film comes down on the side of honesty. 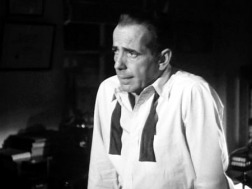 A film which shows not that evidence should be fabricated but the frustrating process of proving guilt when evidence is scarce is The Enforcer. History is littered with examples of people accused of heinous crimes who have later been found to be innocent, usually after they’ve been subjected to an equally heinous punishment. Just this week it appeared in the news that a man has been found guilty of a high profile murder ten years after the victim’s boyfriend was wrongly imprisoned, so you have to be careful in these examples, but The Enforcer constructs such a case.

In this film, Humphrey Bogart plays District Attorney Martin Ferguson, who has managed to find someone prepared to testify against a known crime boss called Rico (Ted de Corsia). Ferguson even has a taped confession from Rico, but it was recorded secretly so is inadmissible in court. The witness doesn’t make it through the night, however, and Ferguson must set about the painstaking business of finding another witness to testify or let the criminal walk free. This is an excellent example of how frustrating it can be to gather evidence on a known criminal, but it also doesn’t succumb to the temptation of fabricating evidence and ignoring basic rights. The rule of law is upheld and a new witness sought.

This is more than can be said for A Time To Kill, where the desire to get Samuel L Jackson’s Carl Lee off murdering two men (in spite of his doing it) is seen as a noble aim because the society he lives in is highly racist, and plenty of other people would have done what he did if their child had been raped too. Acquitting Carl Lee of murder is seen as such a noble aim that it justifies a false plea for insanity and ultimately the jury is convinced not through evidence and rational argument, but by an impassioned description of the child’s rape. In short, it’s ok to ignore guilt and innocence and the rule of law if you think it was ok for someone to kill two people.

Films about false accusation and films which show the difficulty of following due process demonstrate the two sides of the rule of law. On the first account they show what it’s like to be falsely accused, and ask us to put ourselves in that situation, thus showing the importance of our legal frameworks. The second kind do the opposite: they find a highly emotive case of someone committing a crime but leaving insufficient evidence to convict. In this case we see the weakness of the high level of proof demanded in some cases. Both provide an interesting insight into our legal systems, and allow us to see the strengths and weaknesses of different points of view.

One response to “Guilty Until Proven Innocent”