This is Child’s Play, a film set in a strict Catholic school, where unexplained violence has broken out among the boys. For the film about a doll possessed by a serial killer, wait for tomorrow.

When a new teacher, Paul Reis (Beau Bridges) arrives at the school he is caught in the middle of a brewing conflict between the strict Mr Malley (James Mason) and the lenient Mr Dobbs (Robert Preston), against the backdrop of the brutal acts of violence occurring in the school. The two teachers, at odds in their teaching styles, accuse each other of lies and schemes in this taught (gettit?) psychological thriller.

The film’s setting, in the dour Catholic school, is similar to that of Doubt, but adds an element of the fantastical, edging its way towards horror territory. I found it most similar to Roman Polanski’s brilliant 1976 film The Tenant, where a man moves into an apartment building and is hounded to insanity by his neighbours. It shares with that film a sense of atmosphere, conspiracy and closeness unique to 1970s cinema. 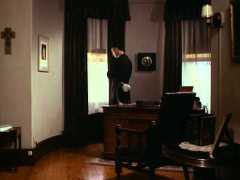 The music here is notably brilliant as violent discords merge with church organs and Catholic chanting to capture the unease and uncertainty of this imposing religious setting. In the night scenes the archaic wooden corridors cast long shadows, benefiting from Lumet’s superb understanding of photography. The darkness coupled with the eerie sound create a feeling of never knowing what might happen next, and a sense of lingering insecurity often missing from modern films.

With the choice between the nice teacher who’s friends with the class and the stern teacher determined to drill Latin into their minds, this film could be an examination of teaching styles. Ultimately it’s up to the viewer what, if anything, it has to say about this, but it certainly raises these questions. As the teachers argue and use their pupils’ interests as bargaining chips, it becomes clear that what they are really interested in is their own egos. This school based thriller should be compulsory viewing in English classes. Not because of any educational value, but because it would be funny to freak the kids out.

The dialogue is notably excellent. Highlights include the witty but cynical Father Penny (David Rounds) and Mr Malley, brilliantly brought to life by James Mason (North By Northwest), who develops fantastically through the film and is menacing yet human. It manages that impressive feat of keeping us guessing right until the end. We want to believe everyone, but someone must be lying.

Another brilliant film from Sidney Lumet, Child’s Play goes for slow, imposing atmosphere designed to create a lasting sense of unease, over the pursuit of sheer terror. It’s incredibly effective and a fine example of 1970s cinema.