If you’re looking for the Sidney Lumet film about an outbreak of violence in a strict Catholic school, see yesterday. This is the story of a doll which becomes possessed by a serial killer and starts murdering people. 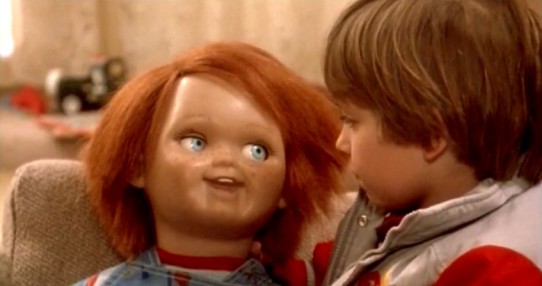 This version opens with a chase as a cop pursues a killer through the streets. He runs into a toy store, where he proceeds to utter a curse to transfer his spirit to a doll. Oh yeah, the killer has magical powers, did I forget to mention that? Cut to the next day, and an unsuspecting child called Andy (Alex Vincent) is celebrating his birthday when he’s given a fun doll to play with, Chucky.

It’s appropriate that a film based on a child’s toy takes a painting by numbers approach, with every kill coming precisely when expected. Like so many films of this kind, once the initial exposition is over you can map out almost scene-by-scene where it’s going, from the first murder, to the ending when the killer comes back after they seemed to be dead. When a film just feels like it’s going through the motions it’s unlikely to scare you.

Its execution isn’t terrible, I should add. Considering it’s about a doll that attacks people it could have been far worse. The acting isn’t too bad, there are moments of mild tension and creepiness, mostly thanks to the music, and they managed to pick a kid that pronounces “Chuck-ey” in an incredibly cute way.

But it also relies on the sheer stupidity of its characters for the plot to work, as they overlook key pieces of information, leave the child unattended with the scary doll and generally behave like idiots. Seeing a grown woman thrash around with a doll at her throat feels like watching an embarrassing uncle pretend to be attacked by a teddy bear. Not scary and certainly not funny.

It’s a criticism I often level at films that they have a handful of good ideas, just don’t know what to do with them. Child’s Play has only bad ideas, and like Chucky, it’s better left in the store.