This 1965 cold war classic follows the ruthless captain (Richard Widmark) of the USS Bedford as it hunts down a Soviet submarine. Near the Greenland fjords, two outsiders join the destroyer – a journalist (Sidney Poitier) and a naval doctor (Martin Balsam), in case anyone has a medical problem with their belly button.

While not actually set on board a submarine, The Bedford Incident is notable for its influence on later movies such as Crimson Tide and The Hunt for Red October. It’s directed by James B. Harris, who had previously served as Stanley Kubrick’s producer. Interestingly, Harris’ movie shares the anti-war message of such Kubrick films as Full Metal Jacket and Dr. Strangelove; it viciously criticises nuclear weaponry and depicts high ranking US officers as sadistic and/or mad.

But the strong politics never get in the way of the human drama. This is a film that absolutely understands the importance of character, and the action rests on the relationships between the three main players. Poitier and Balsam serve as our point of entry into this murky, militaristic world, while Widmark is fantastically imposing as the crazy captain. 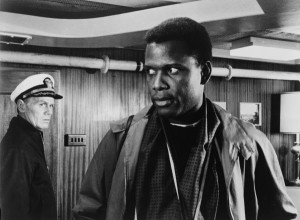 A self-professed “mean bastard”, Widmark’s captain is a grizzled sea dog who shouts things like: “I gave you an order, mister!” and “Make it so!” He’s authoritative, hawkish and practically foams at the mouth when the “hunt” is on. The film’s lynchpin comes half way through the film in the form of a conversation between Widmark and Poitier – a masterclass in writing, acting and character where the dynamics are spot-on.

Equally impressive is the use of sound, used to create tension in a way that’s rare in modern cinema where visuals are leant upon so heavily. The sonar ping, the splashing waves and the whistling wind create an authentic, focused atmosphere. The visuals too are excellent, shot in crisp black and white with some effective slow-panning binocular shots.

The Bedford Incident is a superb movie with important anti-war, anti-nuclear and anti-military overtones. It crucially focuses on characters whose relationships become increasingly intense, just like the global tensions under the film’s surface. Widmark’s performance is particularly great, capturing a captain’s Moby-Dick style obsession. To quote Fry in the Futurama episode Möbius Dick: “Leela, I’m no doctor, but I’m afraid you be exhibiting symptoms of illin’. You’re risking all our lives for your own personal obsession.”

2 responses to “Under The Sea Part 6: The Bedford Incident”