This blaxploitation sci fi asks what would happen if an alien arrived who looked like a black man and instead of landing in a blaze of media to speak to the military or world leaders it arrived in Harlem, where it had to try and make sense of the world of its own accord.

The idea of an alternative alien arrival puts this in the same camp as District 9, but rather than large scale special effects it’s a very small scale story which is primarily character driven. The alien (Joe Morton) is mute, so has to rely on the ingenuity of those around him to make himself understood, but has a gift for healing and repairing electrical appliances.

But before long the men in black are onto him, and pursue him around Harlem as he experiences everything the area has to offer. The immigration overtones are clear, with the white pursuers frequently being mistaken for immigration police. The political ramifications of this aren’t shied away from, with one character telling the men immigration hardly seems to be an important issue when there are people dying on the streets from heroin overdoses. 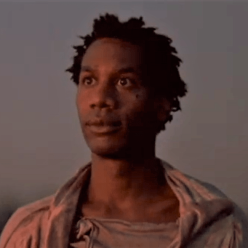 In the sense of having an alien arrive in human form to help humans learn a lesson or provide protection in some way, this is similar to The Day the Earth Stood Still, but less grandiose, and tackling ideas relevant to an impoverished part of New York rather than large scale ideals of world peace.

The alien’s silence avoids the problem of the comedy duck out of water like, say, Hercules in New York, or its 2011 remake Thor. The amusing moments it does have aren’t at the expense of its main character, who is brilliantly played by Morton with an innocent bemusement. There is 80s music in abundance here, and a mood not far away from fellow low budget sci fi The Terminator, made the same year. This is more subtle, however, and more open to interpretation.

This  intriguing and atmospheric low budget sci fi is a film which leaves you wanting more thanks to its subtlety and originality.

The Brother From Another Planet is available free on YouTube.

One response to “The Brother From Another Planet”