Two lowlifes invent a sport which is like basketball but with some elements of baseball to win a bet and impress a girl. When the game goes big they blah blah blah. 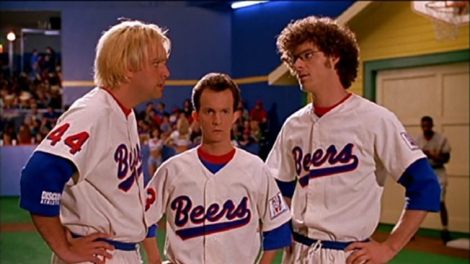 “Oh my god! They killed comedy!”

Trey Parker and Matt Stone have done a lot of good stuff, which doesn’t needed to be listed here. It’s incredible, then, that they could lend their names to such a puerile piece of rubbish as this film. Somewhere between Happy Gilmore and Dodgeball, but closer to the standard of the latter (yes, that bad) it’s one of those awful comedies that relies on cartoonish gurning, over the top, badly done slapstick and gross out comedy to squeeze cheap laughs out of idiots.

How can a film written by one of the creators of Airplane! and Naked Gun and both the creators of South Park go so wrong? You can see elements of all these in here, but the result is far less than the sum of its parts in this often rather unpleasant feeling movie. There are some good gags. Quite a few, in fact. But they are too often the kind of gags you already need some sympathy with the film to swallow, sympathy it completely fails to create. The good jokes are buried in a torrent of offensive, babyish nonsense which destroys the creative spark that presumably existed at some stage of this film’s production.

In South Park Matt and Trey have frequently attacked lazy, stupid comedy, from Adam Sandler and Rob Schneider’s awful movies, to Jackass’s gross out shock tactics that “anyone could do”. It’s disappointing, then, that they could present such an inferior product to the public, and presumably make a fair amount of cash from it. If I was Adam Sandler, whenever anyone said my name at me in a Cartman voice I would respond simply with “BASEketball”.

Parker and Stone at their best are clever, satirical and cutting. Here they aim for the worst sensibilities of the lowest common denominator in a way that’s completely inexcusable. A good satirical film manages to poke fun at a genre while making it an entertaining film of that genre in its own right. A good comedy horror should also be scary, and good romantic comedy should have an appealing romantic element. This sports comedy is not a good sports movie by any stretch of the imagination. It satirises all the things the genre is known for, but fails to make an interesting or exciting movie at the same time. There’s just nothing to invest in here.

This is two very talented people at their worst. Strike out.