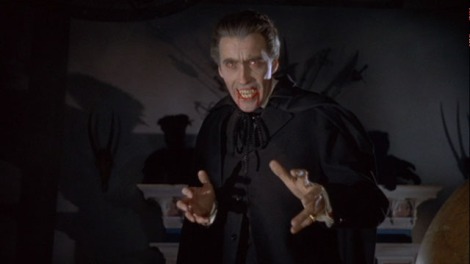 This is the film that finally made Lee a household name at the age of 36, and is perhaps his most iconic performance to date. He completely dominates the screen in spite of having little dialogue, thanks to he impressive frame and physical performance, in this genuinely dark and scary film.

It’s far better than its two immediate sequels (I have yet to see the other five). Even though Dracula Has Risen From The Grave (part 3) is a perfectly adequate film, Dracula is the only one of the three not to look (too) tacky. It feels like a film that sets out to scare. The later films have brighter sets, and feel closer to camp, but Dracula stays true to its intentions and its source material, with a surprising amount of gore and fairly horrific moments.

A good horror film and a British classic, Dracula is enjoyable, well made film.

Also, Christopher Lee recently released his annual Christmas message. He talks The Hobbit 3, The Wicker Man and heavy metal. Check it out.