This classic film is a classic adaptation of the classic novel by H.G. Wells. When mysterious meteors crash land on earth, aliens emerge in seemingly invincible spacecraft and wage war on the whole of humankind. 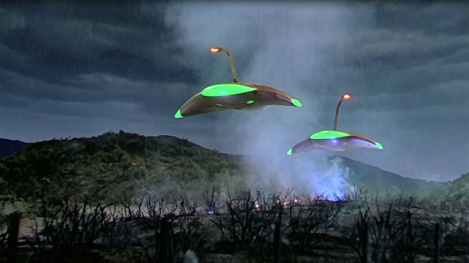 One thing the development of action cinema in the 1980s meant was that violence in films could be dealt with a lot less seriously, as wisecracking good guys made witty remarks alongside their kills and death tolls were racked up. While this shift has often been criticised for trivialising violence, it has the benefit of not needing to take films where absurd or unusual things happen too seriously. In 1953, however, it was a different story, with the events of The War of the Worlds being treated with the utmost sincerity.

True, its relatively recent remake had a similar sense of solemnity, but this was also coupled with far better visuals which avoided primary colours and were, as a result, far more believable. A better comparison is Independence Day in terms of how realistic the invading force feels. The space ships, pictured above, simply don’t feel menacing. Part of this is the effects. But unlike Independence Day there’s nothing tongue-in-cheek about War of the Worlds, which is a shame.

I’m don’t want to complain about the general tackiness of it by today’s standards, but did the strings really have to be quite so frequently visible? The bright green on the ships, as well as the yellow, red and blue of the alien “eye” make it feel like a child’s drawing. It’s on a level that would demand some comic relief nowadays, something which is really missing here.

It’s also far better than its Spielberg remake. It doesn’t have all the divorce stuff (there are worse things, Steven), and feels more like a global conflict that its later counterpart, giving us a real sense of the fightback, rather than following a couple of characters as they run from the machines. The ending is similarly unsatisfactory, but at least in the original plenty happens in between.

Eventually the aliens are defeated not by tanks or nuclear weapons but by the bacteria on earth. This is a pretty annoying climax in and of itself, and again I’m forced to compare to Independence Day. Here when nukes fail they construct another plan to defeat their attackers, they don’t just rely on luck. It would be more satisfying if the humans in War of the Worlds synthesized the bacteria that destroys the aliens themselves.

Anyway, the final scene, as our characters pray in a church, thanks the bacteria that “God in his wisdom” created, implying he put bacteria on earth to protect humans. But he let billions die first. And created the Martians too. And what about all the disease caused by bacteria? If you’re going to use your film to big up God at least do it properly and have him intervene at the start, before loads of people die. The attempt to make him look good just makes him look like more of an idiot.

God aside, this is a decent enough film and a classic piece of sci fi, even if it hasn’t stood the test of time.