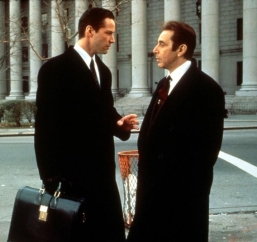 The character of Milton has several give-away signs that he’s actually Beelzebub. He’s superficially charming, multilingual, only travels by subway, and is constantly dropping religious references into his speech. Heck, he might as well have devil horns. Luckily Al Pacino has so much fun with this over the top character that it is, at least, tolerable.

It’s close in mood, feel and general tackiness to the Arnold Schwarzenegger film made around the same time, End of Days, which packs in a similar level of hokey religious schlock to coincide with the turn of the millennium. It manages to get more genuinely creepy moments, however, with Kevin’s wife Mary Ann (Charlize Theron) being driven crazy by New York and its satanic tendencies a la Rosemary’s Baby. This film is better when it stays subtle, with disconcerting creepiness. When it resorts to balls of fire and moving walls it descends to Drag Me To Hell territory.

It’s always better to assume films like this don’t have a message, because if they did it would be one so absurd as to make the film unwatchable. The Devil’s Advocate appears to equate the legal profession with serving Satan, with lawyers everywhere promoting evil one acquittal at a time, proving Kevin’s hardcore Christian mother is right in her belief that New York is a “fallen Babylon”. If this film has a message it’s one that modernity is akin to evil. Given that most people involved in its production probably live in a city, it’s likely just some sweeping religious mumbo jumbo that’s not meant to be thought about for too long.

The final twenty minutes are so over the top that they are funny rather than scary or profound. This isn’t to deny the film’s good moments, but by the time the credits roll you’ll feel like you’ve watched another silly Satan film with little substance beneath the flames.

…And Justice for All

Made in 1979, this is a far more sober look at the legal profession. Pacino plays Kirkland, a principled lawyer sick of trying to get justice served in a corrupt and inefficient legal system. After two particularly troubled clients are failed by due process he is asked to defend hated Judge Fleming (John Forsythe) in a rape case.

This film has no CGI, no special effects, nothing supernatural and no religious overtones, yet manages to be far more engaging than The Devil’s Advocate. It shows how good characters and acting are far better than supernatural nonsense, in a legal drama at least.

While Pacino is once again the star, with a solid performance, the other characters on display are equally interesting. Several of them have quirks and eccentricities that aren’t there for a cheap laugh but simply to make them seem more human. I’m talking actual eccentricities too, not the Meet the Fockers style lame, groan-inducing oddity. 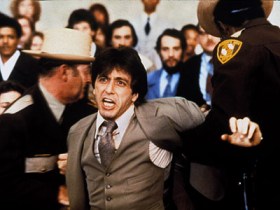 While this might not be at the top of the Pacino canon it’s far better than his satanic outing, managing to ask all the same questions about the ethics of the legal profession and more, without the use of heavy handed metaphor and satanic imagery. It’s exciting and engaging, and even achieves the trick of having humorous moments in an often very serious serious film, a sign of a good screenplay.

2 responses to “Pacino the Lawyer: The Devil’s Advocate v …And Justice for All”