In a world… where every movie trailer has the same booming, masculine voice-over, it’s up to one woman (Lake Bell, which sounds like it should be a place but is actually a person) to break into the overwhelmingly sexist industry. 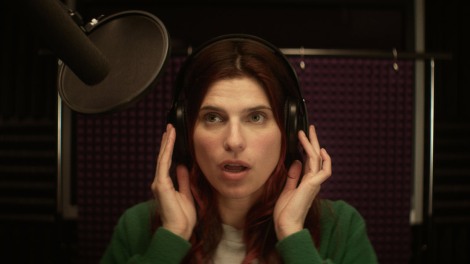 Written, directed and produced by Lake Bell, In a World… is a charming indie comedy from 2013, which benefits from its interesting premise. Set not long after the death of real-life voice artist Don LaFontaine, whose thousands of voice-overs and iconic “In a world…” catchphrase earned him the nickname The Voice of God, it’s a film which looks at sexism in a very specific industry – one we’re exposed to every day, that goes largely unnoticed. Lake Bell’s character must compete with a bunch of unpleasant men, including her own father, to become the voice of a trailer for The Amazon Games – a hot new quadrilogy based on a bestselling series of teen fantasy novels about a world solely populated by fearsome warrior women, with the tagline: “It’s a broad new world.”

These satirical swipes give In a World… its playful edge, making it a film with something important to say, which it says with wit and charm. It’s perhaps not as subversive as is promised by its premise and the whole thing feels rather gentle, but the sparky script, likeable characters and strong performances make it far better than the average rom-com. Lake Bell expertly walks the line between neurotic and loveable known as the Woody Allen Line, or at least it should be known as that. The supporting cast are equally great, including Demetri Martin, Nick Offerman from Parks and Recreation, and Ken Marino who looks like if Sylvester Stallone drank from the Fountain of Youth. In a world where indie movies often suck and rom-coms suck harder, this is a refreshing, smart and funny movie.