In this romantic sci-fi, Jouaquin Phoenix plays Theadore, a man who writes other people’s heartfelt letters for a living. As he struggles to fill the void left by his divorce, he gets a new, super smart AI operating system, Samantha (Scarlett Johansson), which he ends up falling in love with.

As advanced technology integrates itself more and more into daily life, films about how it might influence us in future become more and more plausible. A film about a man falling in love with a piece of software could have been unimaginably corny, but with the technology in the film just on the horizon, it’s surprisingly easy to take seriously. Theodore communicates with Samantha through an earpiece, with her viewing the world via the camera on his phone.Thirty years ago it might have had him clumsily attempting to snog a robot that looked like a washing machine with a face, but with advancing real life technology comes a far more accurate picture of our future.

Phoenix is outstanding in the lead role. Most of the film is just him and Samantha, but since she’s unseen, he’s essentially acting by himself, proving he truly is one of the greatest actors working today. Johansson is also good as the robot intelligence, although I would have preferred Joan Rivers. The futuristic world is brilliantly realised, filmed on real, if very modern, city locations, making it easy to become emotionally involved with. But the dramatic highs and lows are offset by the comedic aspects, some of which are very funny. This film is at times laugh out loud funny, making it very enjoyable all round. Some sci-fi films with a big focus on their ideas adopt a cold, detached feel that’s hard to connect to – films like Primer and Antiviral – but Her sacrifices nothing on the dramatic side.

It’s admirable that director Spike Jonze doesn’t try and show Samantha. It would have been easy to have a beautiful computer generated face on a screen to give the relationship a physical dimension. But the genius of the film lies in its ability to create a relationship between a man and what is essentially a voice in his head. By not showing Samantha he effectively demonstrates the ideal of falling for personality rather than appearance, which is something that’s hardly ever done on film. 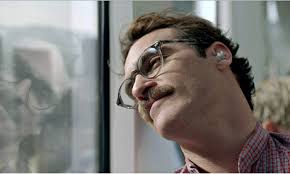 While this is first and foremost a love film, I couldn’t help but view it as the most chillingly believable basis for how AI might take over the world ever imagined on film. While films like The Terminator and the The Matrix focus on aggressive military robots trying to wipe out humankind, Her very plausibly demonstrates how our lives could become completely dependent on software which literally has a mind of its own. We already rely on computers for so much that if they were able to think for themselves they would essentially control our lives.

A brilliant example of this is when Samantha has just been switched on, and has chosen her own name. She then goes through all of Theodore’s emails and sorts the out in a matter of seconds. Perhaps unintentionally, Spike Jonze has brought up questions about our own security, by showing a computer which can think for itself that also has access to our private information. There could quite easily be a dystopian sequel involving a war, possibly one of information, between the humans and the Operating Systems. But perhaps it would be a shame to rob this film of its subtlety like that.

This innovative and interesting romance shows, like Eternal Sunshine and Robot and Frank, that sci fi isn’t just a genre for action-loving teenagers. Its potentially hard -to-connect-to premise is expertly handled, resulting in a film which works as a human (and robot) drama, as well as a piece of speculative fiction.