The Trip to Italy, like its predecessor The Trip, premiered as a film before airing as a TV series, which is why we’re allowed to review it on this movie blog. Also, it’s our blog, we can review what we want. Maybe next week we’ll review a zoo. 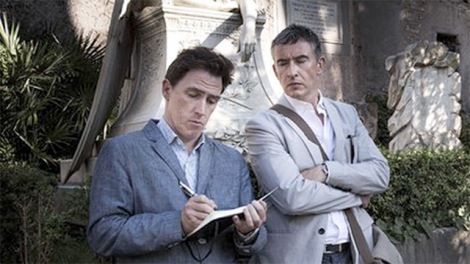 Steve Coogan (Steve Coogan) and Rob Brydon (Rob Brydon) follow up their successful 2010 trip round the Lake District’s fanciest restaurants in the style of all TV sequels; by going on holiday. To Italy in fact, hence the title and its unfortunate similarity to Journey 2: The Mysterious Island, the Dwayne Johnson-helmed sequel to Journey to the Center of the Earth.

The Trip 2: Italy sees Michael Winterbottom return as director and writer, though the writing is kept to a structural minimum. Coogan and Brydon improvise their way through meals, drinks and impressions with effortless wit. It’s an exercise in pure self-indulgence, but one that gets away with it on unbridled charm.

But it’s not a case of more of the same. Well it is, obviously, but the dynamics have shifted since their first outing. The pair are much friendlier and more affectionate towards one another, straying from the original interplay between Coogan’s miserable ‘artist’ and Brydon’s contented ‘entertainer.’

While the Lake District centred on Coogan, Italy focuses on Brydon; it’s his turn to face temptation, which doesn’t work quite as well given the stretching of reality required to accept that he’d garner such interest from Hollywood and young women.

It is, however, as funny as ever, with quips and impressions flowing like Italian wine. The pair bounce off each other with skill and warmth, their friendly relationship laced with petty oneupmanship. Coogan is at his finest when working with Michael Winterbottom, with the obvious exception of Armando Iannucci, while Brydon snatches focus with a hilariously extended Michael Parkinson bit.

This movie version is edited down to two hours but remains comedically and dramatically intact, and lends itself to the big screen with the same cinematic sensibilities that graced the original. Instead of the rolling English hills we get the scenic Italian shores, like some strange parallel version of Pompeii directed by Michael Winterbottom.

Like its predecessor,The Trip to Italy is an eccentric combination; part-food tourism, part-meta drama and part-impressions show, it somehow all comes together in a veritable feast, oozing with pathos, Godfather references and food. So much food. How do they eat so much? It’s probably the tiny posh-people portions.