Produced by Mick Jagger and directed by Tate Taylor, Get On Up is the new biopic of James Brown (Chadwick Boseman). As in the Minister of New New Super Heavy Funk, not James Gordon Brown, who never held such a groovy ministerial position. 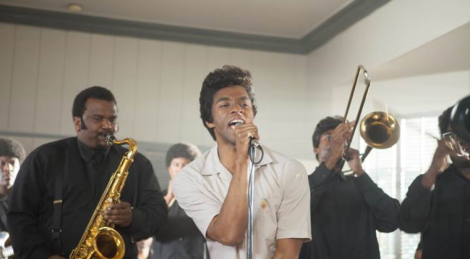 Soul Brother No.1’s rags-to-riches story is such ripe biopic territory that it’s amazing this has taken so long. Presumably they were waiting for an actor good enough to play the Godfather of Soul, and finally they found him. Boseman’s super heavy performance is awards-worthy, totally convincing as Mr. Please Please Please Please Please between the ages of 17 and 60.

He charismatically captures Mr. Dynamite’s musical genius, ruthless personality and general horribleness, as well as his distinctive dance style. His Scarface-esque rise to power is well told by the non-linear narrative, which jumps around like the Hardest Working Man in Show Business up on stage. The film covers the poverty and abuse of his childhood, his fractious friendship with Bobby Byrd (Nelsan Ellis) and the iconic show at the Apollo. As in Harlem, not Hammersmith.

The screenplay by St Albans’ Butterworth brothers hits the familiar music biopic beats, and brushes off Brown’s abusive behaviour, not to mention one particularly misjudged child-fighting scene. Everyone talks constantly about how great James Brown is, mostly James Brown. But great he is, and the film fizzes along thanks to Boseman’s performance and Brown’s music, which remains as infectiously funky as ever. With the tragic exception of Funky Drummer, all his greatest hits are here, from the sexist It’s a Man’s Man’s Man’s World to the brilliant Cold Sweat, whose inception is a musical and dramatic highlight of the film. If you dig James Brown, you’ll dig Get On Up.