If you were to list the finest black screen actors currently working, there’s a good chance the list would include Chiwetel Ejiofor, Anthony Mackie, Don Cheadle and Idris Elba. And these actors have one more thing in common: they’ve all played sidekicks to Marvel’s white superheroes. Now, in the 18th installment of its cinematic universe, the mega studio has made its first film with a lead who isn’t a white man. And boy was it worth the wait.

There was a good chance that the usually risk-averse Disney would pat itself on the back for making a film with an almost entirely black cast and leave it at that. But, perhaps realising the film’s title renders politics inescapable, they admirably grab the rhino by the horn. So while Black Panther has much in common with previous Marvel outings – the plot features a Thor-esque power struggle in a mystical kingdom – it also confronts colonialism, black empowerment and the role of independent nations in a globalised world.
While it’s depressingly unusual to see a mostly  black cast in a major Hollywood blockbuster, this isn’t the only way in which the film is groundbreaking. It centres on the national identity of a non-American nation which is itself unique. And in an odd case of life imitating art, a real-life corrupt African ruler was ousted while we were watching the film – South Africa’s Jacob Zuma.

The highly talented cast is headed up by Chadwick Boseman, previously seen as James Brown in Get on Up. The soon-to-be megastar Michael B Jordan reunites with director Ryan Coogler, and is ably supported by Lupita Nyong’o, Danai Gurira and Letitia Wright. And Andy Serkis once again achieves perfection as arms dealer Ulysses Klaue, a manic cross between The Joker and Wikus van de Merwe.
The standard of writing is as good as the best Marvels, with frequent gags and fully rounded characters who are given plenty to do. The exception is Martin Freeman as a lame duck CIA agent, who ironically (or deliberately?) ends up feeling like the token white guy. Unless they meant to cast Morgan Freeman and when Tim from The Office showed up they had to quickly write a new part. 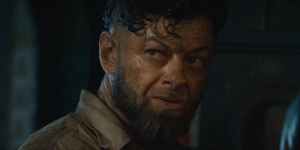 The Afro-futuristic Wakanda is a science fiction fantasy of what an African nation might look like without centuries of exploitation. Add to this a hip hop-infused soundtrack courtesy of Kendrick Lamar and you have a brave and exciting film which further pushes the creativity which has become the calling card of the MCU’s third phase.
The screening we attended inspired cheers and applause the likes of which I haven’t seen since The Force Awakens, suggesting this film’s success may exceed the critical praise already earned. So while it’s certainly great popcorn entertainment, it also manages to exude a remarkable sense of importance.