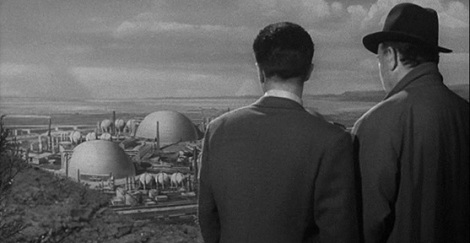 Hammer’s sequel to The Quatermass Xperiment sees the return of Brian Donlevy as the titular rocket scientist, investigating a top-secret facility and an alien infiltration of the top levels of British government – tell us something we don’t know.

This plot (similar to its contemporary Invasion of the Body Snatchers) keeps driving the film forward, packed with cold war paranoia and swipes at the British government. As in the original, London is wonderfully photographed in black and white, but this film is more exciting than its predecessor.

It benefits from gruey special effects, ominous villains in gas masks and Donlevy’s forceful performance as the abrasive Professor Quatermass – a man you’d want around in an alien invasion but not when you’re down the pub. There’s also an appearance from a pre-Carry On Sid James.

The only major problem (beyond the usual insulting portrayal of anyone female) is the film’s ending, which feels abrupt and too easy. It’s not exactly rocket science. Oh hang on – yes it is.

Quatermass 2 is on iPlayer until 1:55am.