A New Year’s Eve celebration on an ocean liner is brought to a watery halt when the ship capsizes. Which is still preferable to most New Year’s Eve parties. 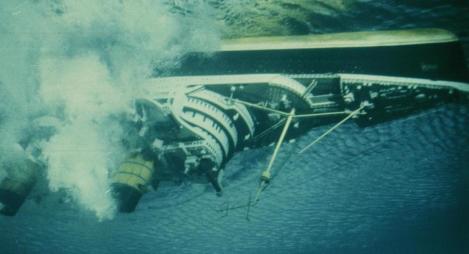 Another huge production by Irwin Allen, the Master of Disaster, 1972’s The Poseidon Adventure is almost identical to 1974’s The Towering Inferno – from the John Williams score to the useless women characters.

The most significant difference (other than the threat being water instead of fire) is that The Poseidon Adventure seems to comment on religion, with a healthy streak of ’70s nihilism.

It presents religion as a ship of fools, blindly following the loudest individuals. Gene Hackman is so shouty that he’s more like Scream Hackman, playing a priest with an oddly exhaustive knowledge of the engineering and layout of the vessel. Maybe God told him.

He’s also the least religious clergyman since Rowan Williams, spending the entire film insisting that God won’t help them, and that man must fight alone. He actually seems to lose his faith entirely over the course of the film – if he had any to begin with.

This is understandable given the amount of destruction he witnesses, convincingly realised through special effects and stunt work. Of course, the film ritualistically and repetitively ticks off every disaster cliché under the sun (and the sea), but is anchored by the all-star cast.

Hackman is great as always, and this film shows that he’s actually always looked old. He’s joined by a whole raft (well, a liner) of stars, including Ernest Borgnine, Shelley Winters and Leslie Nielsen, who’d go on to hilariously send up this type of movie in Airplane!

This combination of human drama and technical direction makes The Poseidon Adventure a highly watchable blockbuster, whose talented ensemble cast keeps the film afloat – even as their world is turned literally upside-down.

One response to “The Poseidon Adventure”