The most overused naming convention in the history of cinema strikes again with American Honey, an indie road movie about an 18-year-old girl called Star (Sasha Lane), who meets travelling magazine seller Jake (Shia LaBeouf) and joins his crew on the road.

This week saw American Honey clean up at the British Independent Film Awards (or BIFAs if you’re feeling acronymonious), including Best Film, Best Actress (Lane) and Best Director for Andrea Arnold. And it’s well deserved. This film serves as further evidence that Arnold is one of the most interesting filmmakers around, because she’s interested in the way people work and understands how to represent those ideas cinematically.

Once again, she shoots in the intimate ‘academy ratio’, eschews famous actors in favour of ‘street casting’ (LaBeouf famously isn’t famous anymore), and tells a story from the perspective of a young woman. Lane is outstanding, and it’s obvious from her comfort in the role (her first) that Arnold fosters a nurturing, trusting environment on set, which pays off in the form of captivatingly honest performances. 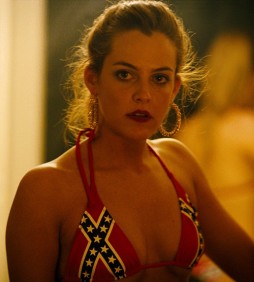 Arnold makes wondrous use of light, nature and music, including a dance scene with a Rihanna song; one of many similarities to last year’s Girlhood. Like-minded in casting methods and sociological outlook, both films examine the female experience, in a way that’s utterly joyful at times and deeply vulnerable at others. But Girlhood was set in Paris; this is America, honey. It unpacks the American Dream and questions society’s values, like Of Mice and Men with hip-hop.

Fashion Death of a Salesman.

As a road movie it covers a lot of ground, both geographically and thematically, exploring the tension between freedom vs responsibility and conformity vs rebellion; LaBeouf  sure has come a long way since robots vs robots. This is arguably the best performance of his career (despite sporting a totally indefensible rattail), while Riley Keough impresses as chain-smoking matriarch Krystal.

My only LaBeouf with this film is the length: 163 minutes. As Led Zeppelin would say, that’s a whole lotta LaBeouf. It could lose some of that material, but honestly not very much. Although three hours is a long time to spend with often obnoxious, opportunistic characters, it’s ultimately worthwhile, as Arnold gives them space to unfold into people and treats them with equality. It’s equal opportunism.

In all 163 mins, Arnold is a force of nature. She writes feeling and intelligence into every gorgeous, elemental shot, dreamily photographed by Robbie Ryan, who also picked up a BIFA (which sounds rude but isn’t). With its outsider’s take on Americana, its primal hedonism, its music, drugs and dancing, this is among the closest cinema has come to capturing the freewheeling, countercultural spirit of Jack Kerouac’s On The Road. It’s a Shia delight.