A couple of weeks ago, Ben Affleck announced that he will not be directing the standalone Batman movie, citing the challenges of directing while wearing the cumbersome Batsuit. Meanwhile, Alice Lowe directed, wrote and starred in Prevenge while seven to eight months pregnant. So maybe she should direct Batman. 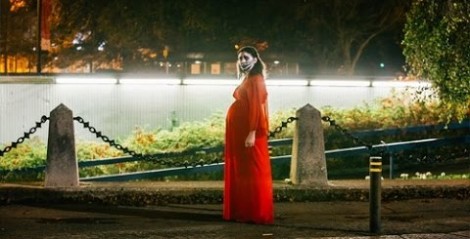 The multi-talented Lowe delivers a great turn as Ruth, a pregnant woman whose partner died in a climbing accident. Prevenge follows her around Cardiff and explores the way pregnancy forces the expectant mother to succumb to the will of her unborn baby. Some make them crave gherkins; Ruth’s makes her go on a killing spree. She’s the scariest baby since this little fella:

The horror genre has often examined pregnancy, from The Brood and Rosemary’s Baby to Eraserhead and We Need to Talk About Kevin. Lowe expands on these ideas using black comedy, similar to her work in Sightseers – very British naturalism alongside totally demented weirdness; wince-inducing horror alongside laugh-out-loud humour. But while Sightseers was a comedy (one of the very best), Prevenge is a more challenging proposition. It’s more of a thematic study, closer to something like the Soska Sisters’ American Mary.

Prevenge makes similarly effective use of its low budget and small-scale production (it was shot in under two weeks), with thoughtful ideas and impressive creativity transcending these limitations. The result is a dark, intelligent and acerbic picture, which gives whole new meaning to the phrase “pregnancy scare.”

One response to “Prevenge”