Given the general bleakness of Australian cinema, where even their comedies are unsettlingly dark, Aussie horror flicks can reach shocking levels of depravity. Hounds of Love is no exception; a nerve-shreddingly intense experience, that knows exactly how much (or, more precisely, how little) to show us for maximum psychological terror.

Newcomer Ben Young focuses powerfully on emotional rather than physical violence, keeping the most extreme moments just out of shot or behind closed doors. Wes Craven’s influence can be seen in the sinister slow-mo shots of innocent suburban street scenes, as kids play netball and jump-rope on front lawns, while the neighbourhood’s silence speaks volumes about Australian society. 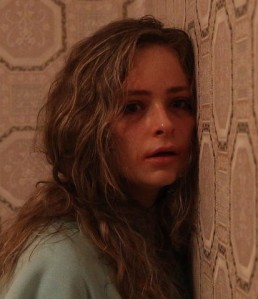 Like Craven’s The Hills Have Eyes, this is the twisted story of two families. Vicki’s mum (Susie Porter) has just left her dad (Damian de Montemas), a wealthy surgeon who buys Vicki a puppy to comfort her during the separation process. Meanwhile, the sociopathic John has bought Evelyn a much meaner dog, as a way of distracting her from pestering John to have her two kids come and live with them (like that’s a good idea). Hounds of Love? Hounds of Emotional Blackmail.

Both women are driven by strong maternal instincts, and find themselves in miserable relationships. The difference is that Evelyn can’t walk away from her’s because it’s abusive, as well as other social circumstances. She has no money. She’s lost custody of her kids. One of the factors that drives her to participate in John’s violence is his promise to reunite them. She’s desperate and broken, and we actually feel for her, thanks largely to Booth’s gut-wrenching portrayal.

At the film’s core are three extraordinary performances, as the trio emotionally manipulate each other in one tiny house, like an Australian Ex Machina. Vicki is no passive victim, despite being chained up for most of the film, and her intelligence allows her to identify and exploit the volatility so brilliantly written into this harrowing relationship. Young crafts an inescapable atmosphere by making us believe in these characters, and matching kitchen sink naturalism with brutal horror. A psychological, sociological and physical ordeal, Hounds of Love is as guttural and blood-curdling as Vicki’s desperate screams. A terrifying triumph.