Twenty years on from the original airing of the ground-breaking Brass Eye, a raft of unseen clips that never made it onto the small screen are resurrected on the big screen. 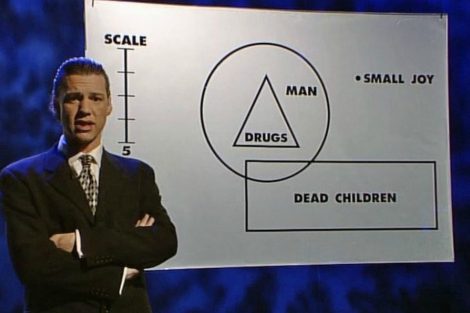 As a result, the film is more based around airing unseen clips than providing insight into the production. To find out how Chris Morris and team managed to pull it off you’ll need to look elsewhere (Disgusting Bliss by Lucian Randall is a good place to start). But it is a timely reminder of Morris’s accomplishment, particularly in this age which is so often described as beyond satire.

The original series, famous for its celebrity set-ups, absurdist look at the news and often nail-bitingly difficult to watch scenes, single handedly raised the bar of news satire to devastating effect. In fact, so potent was Morris’s vision that it actually led to a toning down of TV news, and the dawning of  a more self-conscious age. Cutting very close to the bone with its weighty topics, it also broadened the scope of what comedy could do and pushed the boundaries of what is acceptable to air.

Oxide Ghosts provides unseen celebrity footage, including a phone interview with the incarcerated Reggie Kray that was never shown due to some of the notorious gangter’s pals paying the production crew a visit. Another highlight is the extended outtakes from the scene where Morris bothers real-life drug dealers with absurd made-up drug names (clarky cat, anyone?).

But for all the film’s laugh-out-loud hilarity, some of the best moments are when the camera keeps rolling, and we get a rare glimpse of Morris as himself, guard down, often corpsing. Here we get to see the a glimpse of the pleasant and witty man those who have worked with him say he is, rather than the imposing doom-monger of his TV host persona.

Oxide Ghosts won’t change your perception of the controversial show, but for existing fans it’s a rare and enjoyable chance to get more of something which was very close to being a one-off.

One response to “Oxide Ghosts: The Brass Eye Tapes”