When the infant Perseus (Harry Hamlin), son of Zeus (Laurence Olivier), is almost murdered by his adoptive father, he is sent on a mission to reclaim what’s his, save his people from the Kraken and win the heart of Andromeda (Judi Bowker). 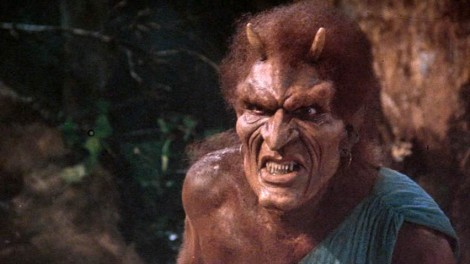 If Clash of the Titans ever looked good, it certainly hasn’t aged well. It’s remarkable that it was released in 1981, looking like it was made 20 years earlier, with effects that are easily surpassed by Cleopatra, Ben-Hur, The Ten Commandments and Spartacus. 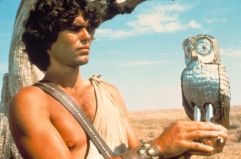 With stop motion pioneer Ray Harryhausen in charge of effects, some of the  monsters that populate the film look good, like Medusa, giant scorpions, the two-headed dog and Calibos, played by Neil McCarthy in rather good makeup in closeup, but a stop motion creation from a distance.

But most of the effects are nearer Bagpuss standard, especially the golden owl and the remarkably un-menacing Kraken – not helped by the fact that he’s released by a Poseidon who looks decidedly uncomfortable under water. And even the effects which look good by themselves manifestly fail to integrate with their surroundings. There’s a definite sense that they went for quantity over quality.

All this could be forgiven if there was some better writing or acting, but this is nothing but fantasy movie clichés, slowly spelled out. Perseus is not an engaging hero, and with Zeus and an array of magic weaponry on his side, the odds aren’t exactly stacked against him. The highlight is Burgess Meredith as Ammon, managing a very good English accent.

The situation probably wasn’t helped by the fact I watched the Lord of the Rings trilogy two days earlier, which is at least twice as good as the next best fantasy film. Before that, fantasy meant hokey plots, bad acting and dodgy effects. So Clash of the Titans all over.