Not to be confused with Tom Hanks movie Sully, Tully follows Marlo (Charlize Theron), a struggling mother who’s saved from exhaustion by the arrival of a “night nanny” called Tully (Mackenzie Davis); a kind of millennial Mary Poppins who’s exactly as annoying as that sounds.

Not so much a name as a word you might use to describe music that sounds a bit like Jethro Tull, Tully is the 4th collaboration between Juno writer-director-duo Diablo Cody and Jason Reitman, and their 2nd film about pregnancy.

After a decent opening, including some smart swipes at middle-class parenting, the movie starts to fall apart the minute Tully is introduced; a Manic Pixie Dream Girl character that the film doesn’t know what to do with. 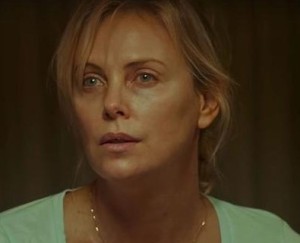 Is that Caroline Mabey?

As a result the pregnancy drama never trully finds its feet and ultimately fails to deliver. Its half-baked psychological hints make as little sense as the plot, whose unconvincing twists fail to add up to anything beyond the suggestion that Reitman is making a bid to outweird his father’s pregnancy movie Junior.

Theron is relatable and likeable as Marlo, but the rest of the film less so, swerving between the oddly bleak and the downright cloying. To be honest Mother! has a more joyful view of motherhood.

More confused self-help video than anything approaching insightful drama, Tully is inconsistent, irritating and more than a little dully. In the end Marlo and her night nanny are more like Merlot and Night Nurse: may cause drowsiness.