Unfriended: Dark Web is the latest entry into the internet-based found footage sub-genre, or ‘pwned footage’ for short. 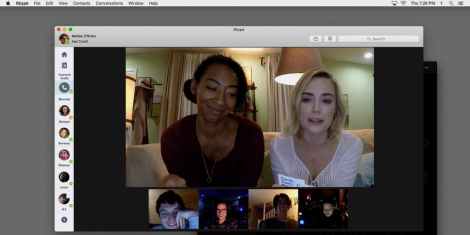 More an anthology-style successor than a sequel to 2014’s Unfriended (which is just as well considering I can’t remember what happened in that one), this cyber slasher again takes place entirely on a computer screen. Both films are co-produced by Jason Blum and Timur Bekmambetov, the Russian-Kazakh filmmaker who also produced the upcoming screen-set thriller Searching and whose face is probably stuck to a dartboard at the Cinematographer’s Union.

The film (let’s call it The Skypening) follows a group of friends having a game night over Skype with horrific results, chief among them being to remind me of the recent movie Game Night. Matias (Colin Woodell) has acquired a laptop and is trying to configure some dictation software that allows him to communicate with his deaf girlfriend Amaya (Stephanie Nogueras), when the laptop’s owner starts sending him threatening Facebook messages.

Matias responds with a level of stupidity reserved for Trump lawyers and characters in horror films, a level that means they deserve everything that’s coming to them. This makes the picture voyeuristic and nasty, but not without a moral about being safe online. The first film discussed cyberbullying, but Melania Trump has resolved that issue, allowing this one to focus on hacking.

Unfriended: Dark Web features all the latest youth obsessions: Cards Against Humanity, Bitcoin and trepanning. The self-contained, real-time events produce an effectively Glitchcockian tension and some of the scariest webcam footage since WebCameron. It’s a smart, ridiculous and timely (albeit short on shelf life) horror flick that takes the ‘Spinning Beach Ball of Death’ expression literally.

Where Friend Request was the biggest Facebook-based disappointment since you realised the ‘see more’ button on people’s photos only showed you more photos, the Unfriended movies do have something relevant to say about life online. The internet is not a game (apart from Slime Soccer), so be careful out there or you too could end up in a Jason Blum movie. Speaking of which, I’m off to play darts.