Today we look back on Re-Animator to celebrate H. P. Lovecraft’s birthday; a writer whose ideas still echo loudly around the horror genre and certain parts of the Labour Party. 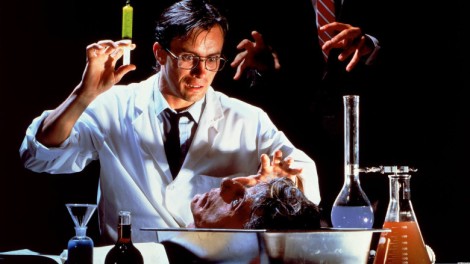 Jeffrey Combs plays a scientist obsessed with re-animation (not the Linkin Park album) in this horror-comedy from 1985, the same year as The Return of the Living Dead; a great year for trash. It’s directed with mad-scientist glee by Stuart Gordon and produced by Brian Yuzna, who would go on to direct Return of the Living Dead III, having worked with reanimated corpses before.

The tone is closer to Alice Cooper’s ‘Teenage Frankenstein‘ than Mary Shelley’s, bursting with deadpan gags that make the film feel like a strange hybrid of David Cronenberg’s The Fly and Steve Martin’s The Man With Two Brains. This combination of funny images and wild special effects will make your head spin, fall off and start laughing.

Strangely, the censored version is longer than the unrated version, as the deleted scenes were replaced with lengthier (presumably duller) ones. Stranger still, there’s a character called Hans Gruber, 3 years before Die Hard. And if that doesn’t freak you out, stick around for the most horrifying re-animated cat since Garfield: The Movie.

There are also a number of allusions to Psycho, including Combs’ Anthony Perkins-style performance and the Bernard Herrmann-esque score by Richard Band; composer of one of the greatest horror themes ever written, and brother of filmmaker Charles Band, the man behind such titles as The Gingerdead Man, Evil Bong and of course Gingerdead Man vs. Evil Bong.