There’s a fan theory that Get Out is a secret sequel to Being John Malkovich, and the new dark comedy Sorry to Bother You feels like the missing link between the two. 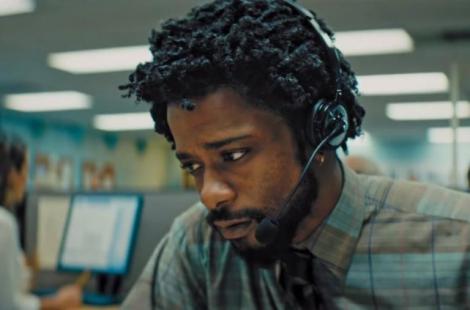 The telemarketing office in Sorry to Bother You doesn’t have low ceilings but Lakeith Stanfield (who appeared in Get Out, and played Snoop Dogg in Straight Outta Compton) stoops anyway, making calls in his “white voice” (actually that of David Cross) to climb the corporate ladder at the annoyance of his union buddies. It’s like Spike Jonze meets Spike Lee meets Mike Leigh. At first. Over almost 2 hours (which is too long) the wacky comedy descends into freaky sci-fi so paranoid it makes They Live look like a documentary.

Rapper-turned-writer/director Boots Riley has Jordan Peele’s anger but neither his craftsmanship nor discipline, ultimately juggling too many ideas. His grotesque satire of capitalism is sledge-hammer heavy and bizarrely entertaining, in a 2am, Executive Koala kind of way. The messy but fun genre-hopping is buoyed by the talented Tessa Thompson as the girlfriend/artist (like the Creed films), and Stanfield’s finest portrayal of a sell-out since Straight Outta Compton.

Timely, funny and flawed, this absurdist-protest B-movie hybrid will have the picket line joining the ticket line.