How to explain Being John Malkovich? Well, basically an out of work puppeteer called Craig (John Cusack) gets a job in an office with a 5ft ceiling. When at work he discovers a portal into the mind of John Malkovich, where he remains for about 15 minutes before crash landing in a ditch near the New Jersey Turnpike. As he gains more control over Malkovich, a love triangle develops between Craig, his wife Lotte (Cameron Diaz) and his work colleague Maxine (Catherine Keener).

This is writer Charlie Kaufman’s first feature film, but his unique style is there. Sometimes on this blog I tire of criticising films for being run-of-the-mill. Maybe being ordinary isn’t that bad, I think, maybe there’s just not much left to do. Then I watch a Kaufman film and realise other writers really need to up their game.

He has a unique and recognisable style which shines through, while his films remain completely distinct from one another. He also has a perfect knack for bringing incredibly fresh, original ideas to the screen and presenting rich, densely layered cinema in a way that’s easy to follow. His films are a canvas for expression and philosophy, but brilliant stories too, with believable characters and deadpan, downbeat humour. Being John Malkovich exemplifies all these things.

One of the things that’s so fascinating about the film is how delightfully weird it is from the start. Craig goes to floor 7 1/2 of the building where he works, where people stoop around the office apparently oblivious to the absurdity of it. In this peculiar world, people constantly misunderstand each other, which is actually surprisingly like real conversations. Conversations Dan and I have anyway.

Yet in spite of how weird it is, it never feels over the top, zany or cartoony. On this blog I recently berated at length the comic tone of Terry Gilliam’s Brazil, arguing the persistent satire and exaggerated comic elements made it hard to connect to. This is never a problem in Being John Malkovich, with characters that remain relateable in spite of the absurdity. The more unusual elements of the film are not hyped up with flamboyant performances, but become almost unnoticeable as the characters respond in such a matter-of-fact way. 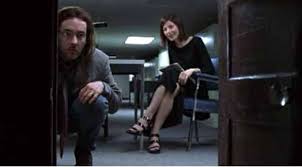 On the topic of characters, it’s an interesting feature of this film that all the characters are highly flawed, mostly due to being completely selfish. In different ways, they all pursue their own interests at the expense of others. In this sense it seems to be a study of narcissism and self-love.

One of the characters is only able to love another while inside the body of a film star, and when Malkovich goes through his own portal he goes into a world where everyone has his face. The puppet master is the classic sign of a Machiavellian character (see The Godfather logo), and here it is no different, with the manipulation occurring between the three main characters via their manipulation of Malkovich taking the idea a step further.

It may also be about human sexuality, played out and explored in great detail by the behaviour of the aforementioned love triangle and the role Malkovich plays in their relationships. There’s a brilliant scene near the start where Craig plays out his fantasy encounter with Maxine using his puppets, then sees her in a real life situation which is very far from what he dreamt. This juxtaposition of aspiration against the grim reality of our lives, exacerbated by our own anxiety, is fantastically well observed and very funny.

The film looks at the concept of identity, and what we could do were we to live behind a mask. Craig’s outlet was his puppets, which enabled him to live out a proxy for his own disappointing life, but then he finds solace in living as Malkovich, and a way out of his miserable existence beyond his wildest dreams. Similarly his wife lives through her pets, and again finds an outlet in Malkovich.

There are elements which seem to be a satire of the cult of celebrity in the way these non entities feel the need to literally live as and see the world through the eyes of a famous actor to be happy. It can even be seen as a parody of capitalism, and the way we consume natural resources, as Craig and Maxine’s desire to make money trumps, for them, Malkovich’s right to control his own mind. Malkovich deserves huge credit for his excellent performances as himself and the people inhabiting him, and for his willingness to use himself and his celebrity to make this film work.

I first watched this film as a ten year old, and enjoyed it, but it’s only improved with age (both my own and the film’s). It’s a brilliant drama, which is funny and entertaining, but is also endlessly thought-provoking, deep, existential and incredibly original.

7 responses to “Being John Malkovich”