When a bullied schoolboy (Louis Ashbourne Serkis, son of Andy) finds Excalibur on an abandoned building site, it’s up to him and a ragtag group of classmates to thwart the return of Morgana; an important task if her first series was anything to go by. 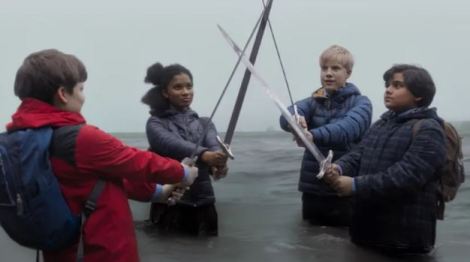 This retelling of King Arthur is taken painfully literally by writer/director Joe Cornish, who gives the kids the same names as the Knights of legend and has them wield swords, fight a sorceress (Rebecca Ferguson) and sit at round tables. Which would be fine if there were any jokes, but this is an oddly humourless and corny effort by Cornish. The lame script and lazy production create a cloying, depressing movie that looks more like a CBBC programme than an Attack the Block-style genre-buster, full of unengaging characters and a CGI villain who spends the whole thing glued to a tree from some reason.

It’s no surprise then that this interminable feature has lost the studio $50m, although one wonders where the budget went in the first place. Surely not on visual effects, given the low-rent CGI and low-calibre Excalibur prop; and certainly not on actors, unless Patrick Stewart demands a lot of money to appear in a film that’s not so much “make it so” as “make it stop.” Even the editing feels amateurish and awkward, rendering the movie as long and dull as a blunt sword.

By far the best thing about the film is The Archers’ Angus Imrie (let’s hope he’s heard Cornish’s Archers edit) as Merlin and appearances from Nick Mohammed and Adam Buxton, except that the latter has the unfortunate effect of reminding Pod Cats of Cornish’s hilarity alongside Buckles. On its own terms, The Kid Who Would Be King is like pulling sword from stone; hard work. But in the context of Adam and Joe, it becomes more like pulling teeth; bloody painful.