This New Zealand comedy follows a pair of women (Jackie van Beek and Madeleine Sami) running a company that breaks up couples – essentially Hitch but, like the way toilets flush over there, in reverse. 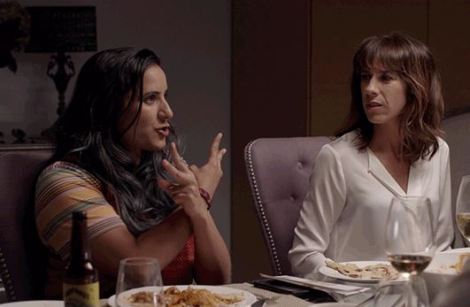 Written and directed by Sami and van Beek, The Breaker Upperers is a quirky Kiwi comedy, if that’s not tautological. All Kiwi comedies are quirky, or at least that’s how it appears to us Brits – down there this might be the most mainstream film in the world. It could even be a hard-hitting drama for all I know. And do they all have someone from Flight of the Conchords (in this case Jermaine Clement) or is that just the ones that make it over here, to help us orient ourselves?

Offbeat and breezy, the film is gently amusing rather than laugh-out-loud funny, charmingly performed by the two leads who form the refreshingly realistic friendship at the heart of the movie. Executive produced by Taika Waititi, The Breaker Upperers isn’t in the same league as What We Do in the Shadows (with Jermaine Clement) or Hunt for the Wilderpeople (with Rhys Darby) but the humour is naturally similar and good-natured, sporting a healthy ‘who cares?’ attitude to sex and gender. As a bonus it features stand-up comic Rose Matafeo and the best use of a Celine Dion song in any movie. Ever.