In an post-apocalyptic future, a secret location known only as The Room promises happiness to those who find it. But the only way to get there is to hire a guide known as a Stalker (Alexander Kaidanovsky) to successfully navigate the military-secured land known as The Zone. Those seeking The Room are known simply as the Professor (Nikolai Grinko) and the Writer (Anatoly Solonitsyn).

To say this low-tech Cyrillic sci-fi flick is bleak is an understatement. And with a group of people navigating a strange land in search of mystically-imbued happiness it’s a bit like The Wizard of Oz meets Chernobyl. Directed by Andrei Tarkovsky, it won’t come as a surprise to anyone who’s seen Solaris that he may be Russian but he’s certainly not in a hurry.

The characters start in a sepia-toned wasteland, before breaking through a military blockade to enter The Zone, which is green and fertile but perpetually overcast. Maybe they came to Britain by accident. Once inside Tarkovsky ingeniously maintains a palpable sense of threat in spite of the fact we rarely see anything which looks threatening.

In The Zone nothing is as it seems, and the most obvious paths are often the most dangerous. The characters proceed slowly, checking for traps as they go, and discussing their reasons for seeking The Room. 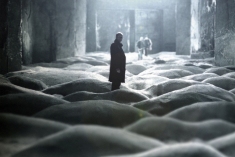 There’s a certain anti-intellectualism to the film, with the Writer and the Professor appearing deeply flawed and rather self-righteous in their own ways. Meanwhile the Stalker is the more honest and trustworthy character, perhaps reflecting the Soviet working class ideal.

It’s filmed almost entirely in real locations such as abandoned factories, and the toxic chemicals in the air reportedly contributed to Tarkovsky’s early death from lung cancer. But his suffering wasn’t for nothing, as it’s a superbly shot film, with meticulous framing through long takes in spite of the fact it had to be re-recorded after the original stock was damaged. The result is a stark musing on life, death and easy promises of happiness.

One response to “Stalker”