Sam Neill investigates the disappearance of a popular horror novelist whose books are making people go crazy, in the third part of John Carpenter’s Apocalypse Trilogy, not to be confused with The League of Gentlemen’s Apocalypse albeit similar in premise. 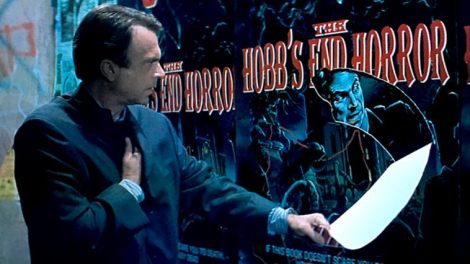 The trilogy (also comprising The Thing and Prince of Darkness) is loosely tied together by Lovecraftian cosmic horror and a questioning of reality, confronted in this case by an insurance investigator (Neill), like Fight Club meets Wes Craven’s New Nightmare which came out the same year.

Released in 1994, In the Mouth of Madness sees novelist Sutter Cane’s (explicitly modelled on Stephen King) fictional world come to life, satirising the notions of scripted violence breeding real violence and pop culture as a form of religion. “More people believe in my work than believe in the Bible,” says Cane, creepily played by Das Boot‘s Jürgen Prochnow. 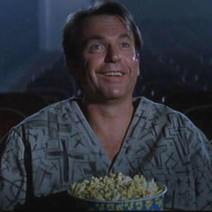 Neill is excellent as ever as the rational investigator whose reality is ripped away like pages of a novel, vividly realised through Carpenter’s idiosyncratic atmospherics and truly spellbinding special effects. The tagline is brilliant too: “Lived any good books lately?” Charlton Heston also stars as Cane’s publisher and gets the line smartly used in the trailer: “The movie comes out next month.”

Carpenter combines the supernatural thrills of Prince of Darkness with the cultural paranoia of They Live to mind-boggling effect, creating a mad fusion of Clive Barker, David Cronenberg (particularly Videodrome and eXistenZ) and the Star Trek TNG episode The Royale. The result is jumpy, moody and packed with so many ideas you can feel it bursting at the seams.

Dizzyingly Lovecraftian, pleasingly postmodern and boundlessly entertaining, In the Mouth of Madness is not only one of Carpenter’s most underrated pictures, it might be one the most undersung horrors of the ’90s. Pick up a copy, it will drive you wild.