A small-town police force (Bill Murray, Chloë Sevigny and Adam Driver) battle the undead in this zombie comedy set in an upside-down world where the dead are risen and the audience put to bed. 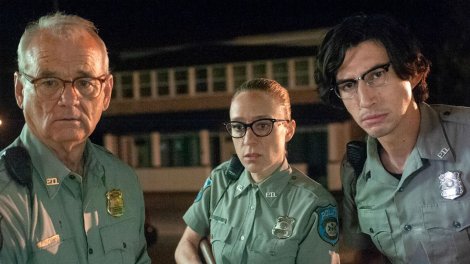 Where Jim Jarmusch’s last feature Paterson was all about the detail, The Dead Don’t Die takes the opposite approach, throwing everything at the wall and hoping his cast of fan-favourites can charm their way through the mire. This desire to incorporate as many of his favourite actors as possible (including Tilda Swinton, Caleb Landry Jones and Tom Waits) works to the film’s disadvantage, with plot and characterisation distributed thinly between the eccentric ensemble (although the casting of Iggy Pop as a shambling ghoul is a stroke of genius).

One of the first jokes is that Steve Buscemi’s character is racist (his “Keep America White Again” hat is a nice touch) so why does he get embarrassed when he accidentally says his coffee is “too black” with Danny Glover sat next to him? It feels like a first draft; odd for a filmmaker with such an uncompromising reputation.

Part of the problem is that Jarmusch’s arch, detached style is simply unsuited to the zombie genre, where some sense of urgency is needed even in comedy. He namechecks George A. Romero and pays lip service to the director’s social commentary, but doesn’t seem to understand that the visceral side of zombie flicks is essential too.

He has said he wanted to make a “stupid film” and has fulfilled that particular ambition, the issue being that the Living Dead trilogy wasn’t stupid. There were stupid things about it but a good parody will send those up while also ensuring that the zombies function as a threat; a balance neatly struck by Shaun of the Dead and the Murray-cameoing Zombieland, while this year’s One Cut of the Dead proved that this walking corpse of a genre can still take us by surprise.

Conversely, The Dead Don’t Die fails to raise more than a few chuckles, its comedy appearing limp and its satire toothless; the gag about zombies shuffling around in search of WiFi is more Dilbert than Romero, and the idea of characters in a horror movie who’ve watched horror movies was better executed in the ’90s without turning into a Wes Craven-meets-Wes Anderson car crash. And not the ‘can’t look away’ kind; the ‘fell asleep at the wheel’ kind.