Set in London between 1919 and 1939, This Happy Breed follows the Gibbons family enjoying two decades of peace between the world wars, against a backdrop of growing social unrest and international tension.

This a healthy slice of social realism from David Lean and another one of his films to be based on a play by Noël Coward. The family are well drawn, including straight-talking father Frank (Robert Newton), no-nonsense mother Ethel (Celia Johnson) and their children Reg, Vi and Queenie (John Blythe, Eileen Erskine, Kay Walsh), who are far too old to play teenagers at the start of the film. 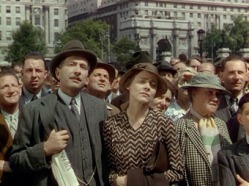 While it focuses on the significant milestones in the Gibbons’ family life, they’re also not afraid of a political discussion, back in the days before social media algorithms made us unable to sit around a table with people who disagree with us. There’s socialist Sam (Guy Verney), who supports the general strike, while Frank is a supporter of Conservative Prime Minister Stanley Baldwin, and when Chamberlain appeases Hitler it causes a heated row between Frank and aunt Sylvia (Alison Leggatt).

Against this tumultuous backdrop there are births, deaths, estrangements, reunions, and the introduction of jazz to Britain, with an ambitious scope that would become a Lean hallmark later in his career. Yet it spite of how much ground is covered it never loses focus on the family. The London street is reminiscent of John Boorman’s Hope and  Glory, set during the second world war, which feels almost like a sequel to This Happy Breed.

While this is Lean’s solo directorial debut he’s clearly already attained a great deal of technical skill, bringing the film to life, both in the confines of the family’s simple home, and in his trademark crowd scenes of military parades and cheering supporters outside Chamberlain’s Number 10 window. Made in 1944 while the second world war still raged it must have felt like a trip to a long lost world for the cinema-going audience at the time, and yet it retains its impact long since the bombs have stopped flying.